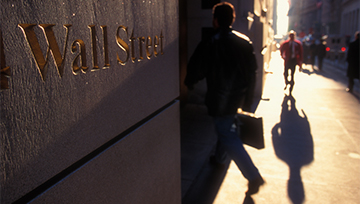 The major US equity indexes were on the verge of turning their months-long bull tide - at least temporarily. Yet, just as the S&P 500 was positioning for a reversal on a clearly formed head-and-shoulders pattern, the bulls swept in to crush the bears' ambitions. On the back of six consecutive bearish opening gaps (one of only six such instances in the past decade), the benchmark index posted a positive jump and the second largest daily rally in two months. Given the breadth and depth of complacency, US equities would serve as one of the best indicators that a systemic shift in confidence had occurred should they truly turn. Instead, we found similar patterns across the other benchmark indices and the Nasdaq Composite would push to a record high. Among other risk-oriented assets that found their footing from provocative technical developments; global equities posted more restrained bounces, the VIX reversed from a large wedge resistance and the HYG junk bond ETF posted its biggest bullish gap since March to jump back above its reversal 'neckline'.

Amid this wide-spread risk trend reprieve, there was a notable stray among the usual suspects: carry trade. The Deutsche Bank Carry Harvest index posted one of its largest bearish gaps in months to an 18-month, intraday low. That would in turn translate into weakness for the Yen crosses with USD/JPY in particular sliding back from from 114.50 resistance. I am still fond of this pair should an anti-Dollar sentiment prevail but full-tilt risk aversion would be the more capable driver for a genuine bear swing. Speaking of the Greenback, the day's top event risk managed to leverage little reaction from the currency. The House of Representatives passed its own version of tax reform and the standard arguments of corporate tax cuts translating into economic expansion have been applied. On this point, there is significant debate over the extent of benefit this confers on the economy; but there is little doubt on what the implications are for the deficit. The United States debt load will swell in the early years of such a programs adoption. That carries significant risks for the Dollar and US investment based on Treasuries.

Across the other major currencies, the Euro seemed to overlook ECB Member Nowotny's views that the local currency would continue to rise over the coming years. EUR/USD, EUR/GBP and other Euro crosses found little encouragement. Perhaps ECB President Draghi will offer more conviction - for better or worse. Central bank speak was also a feature of the Pound's landscape. The top brass at the Bank of England offered a collective view that Brexit presented considerable uncertainty and wage growth was a critically absent component of a robust economy. It is looking less and less likely that GBP/USD will be divining a clear and strong trend any time soon. Outside the traditional currency set, commodities offered little speculative refuge with oil consolidating above 55 and gold making no effort to stage any sort of trend. In crytocurrency, Bitcoin managed to surge to a fresh record high, but Ripple was the coin whose volatility that truly stood out. News that American Express and Santander were looking to use Ripple's blockchain network to clear international payments added yet another infusion of legitimacy. We look across the market for opportunities gained and lost in today's Trading Video. 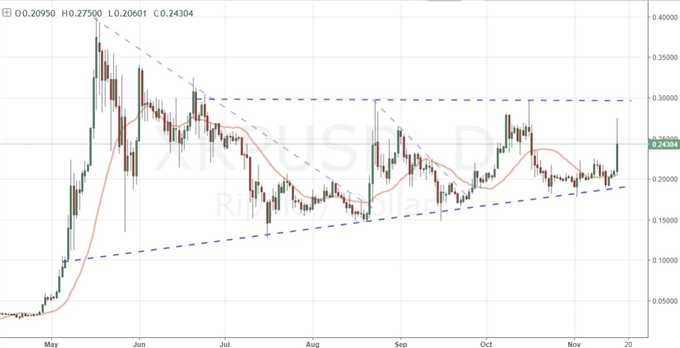 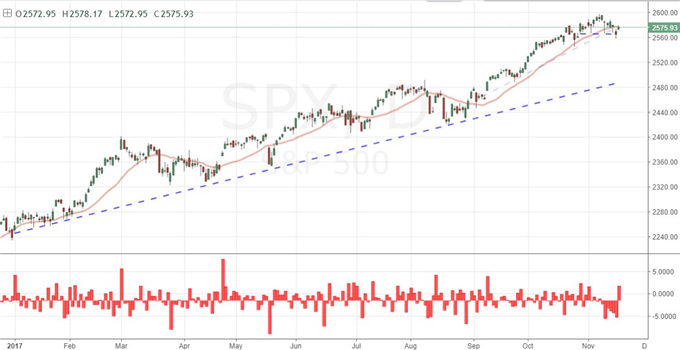 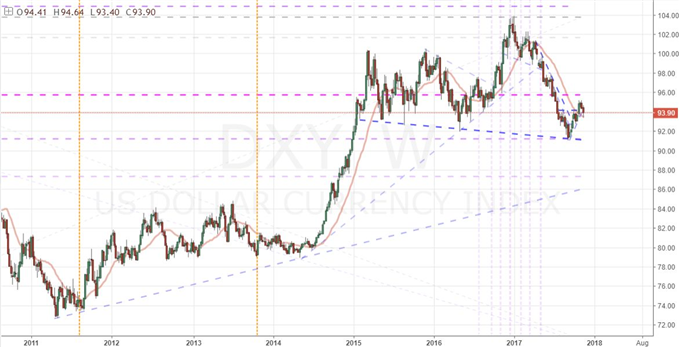