The Dollar's attempt to forge a clear intent reversal fell apart this past session as its head and shoulders pattern broke down. Will the S&P500 which has positioned for the same pattern fair any better?

Risk trends have softened over the past week. Not enough to produce wide spread concern of speculative unwind, but certainly enough to add anxiety to an already hyper-vigilant market. The high-yield fixed income market (also referred to as 'junk bond') produced an overt technical breakdown last week, but this single market's capacity to pull the financial system with it was dubious at best. But then there was also the hearty retreat in key global equity indexes (German DAX, British FTSE 100, Japanese Nikkei 225) as well as the emerging market benchmarks. All would close in on important technical levels of support without making that critical step over the line. Now, the technical pressure has hit a speculative favorite in the S&P 500. A head-and-shoulders pattern has been completed with a 'neckline' of 2,566. This is a provocative rather than productive situation so far; but the levle of skepticism behind the market in the persistent build up behind risk assets is like looking over the cliff as you stand at the edge - a sense of vertigo threatens to pull you over.

I am a fan of head-and-shoulders patterns as they are remarkably clear in their implications of changing conviction. However, to play the role of an active catalyst for speculators, there needs to be a material shift to a market that is more prone to carry trend which we still have yet to see. There are many examples of similarly clear technical patterns that have been staged and even detonated only to fall apart soon after the impetus has been added. Add the Dollar to that list. This past session, the ICE's Dollar Index (DXY) dropped back below 94 - a level that was the neckline on a three-month inverse head-and-shoulders reversal pattern. Immediately after the bullish break of that level back on October 26th, all motivation to fulfill that build up seem to have left the market. Having consolidated just above its clearance level since, the potential for a self-sustaining speculative move was lost and the next stage was open to the next fundamental stepping stone. This past session saw outgoing Fed Chair Janet Yellen speaking at an ECB panel - that also hosted ECB's Draghi, BoE's Carney and BoJ's Kuroda. They all committed to forward guidance as a tool where few currently exist and amid a general change in global accommodation. She did not undermine the time table for further hikes as was clear in shorter-term Treasury yields or the implied rate derived from Fed Funds futures; but the Dollar was clearly not heartened. I'm happy I stuck to my strategy to stay out of the EUR/USD short that I cut this past Friday for not making progress in a timely manner.

Meanwhile, the Euro experienced the opposite outcome. While ECB President Draghi didn't support expectations of an expedited withdrawal from extremely accommodative policy, the currency nevertheless rallied. I will not be participating in an extension of pairs like EUR/USD, EUR/JPY or EUR/AUD unless something wholesale changes in the circumstances of the Euro. The BoE's Carney reiterated his bank's concern about the uncertainty that Brexit held for their own policy efforts, but certainly didn't clarify anything for the market on what to follow. There is a conflict between whether to give more weight to the BoE's standing in the global policy spectrum or the uncertainties of Brexit. That is unlikely to clear up anytime soon - with the exception of a crisis. Nevertheless, UK jobs and ongoing discussion of the UK government's position at the Brexit negotiation table will hold the threat of volatility over Sterling traders' heads. While it is important to watch these majors, it is also worth looking at the currencies that don't carry so much fundamental baggage. The AUD/CAD and NZD/CAD may not be pairs you normally look at; but in this world of fundamental conflict, perhaps you should. Finally, the biggest move of the day was not registered in FX or indices; but rather, US crude oil's tumble Tuesday carried deeper implications than just the biggest drop in months. It undermined the commodity's own long-overdue (more than two years in the making) reversal. We look at all these markets and way the possibility of extending nascent trends and new reversals in today's Trading Video. 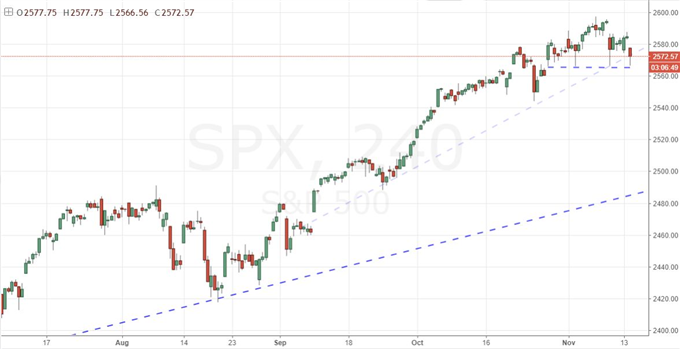 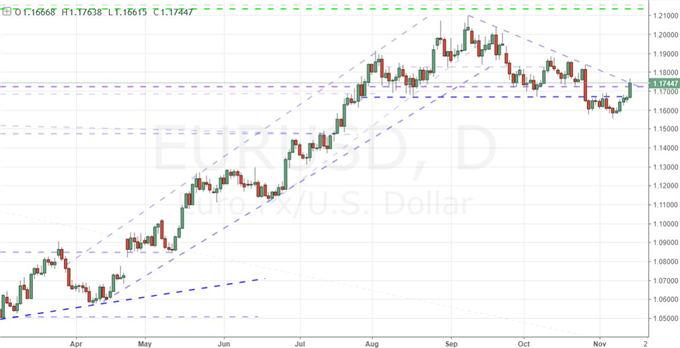