Will the Dollar, S&P 500 Derive More Drive from NFPs than Fed and Powell?

The high profile headlines from US markets continued to scroll across the ticker, yet neither the Greenback nor local capital markets seemed to reflect a significant response to the updates. Following the Federal Reserve's decision to hold monetary policy until they could evaluate the situation in December (meeting concentrated expectations), we met news that benchmarks like the S&P 500 have long anticipated. GOP leadership released its tax reform bill proposal Thursday and a range of significant cuts were listed as promised. While this still requires approval in the Legislative and Executive channels, it makes material something that has driven speculation since the outcome of the US election last November. The two economic-focused policy commitments that were touted during the campaign by President Trump were tax reform and infrastructure spending. Anticipation of these efforts and the economic support they would confer offered no small contribution to the 20 percent plus climb registered over that period. Yet, this news did little to recharge the run for US shares - much less other assets falling under the 'risk' umbrella that aren't domiciled in the US. Perhaps this eventuality was fully priced in or it has even overtaken the implicit value it represents. Traders should keep tabs on a selection of various benchmarks that are fundamentally unrelated unless it is connected to risk - such as US equities (ie SPX); global equities (ie MSCI World); carry (DBV); junk bonds (HYG); etc.

Another high profile alert Thursday afternoon was the announcement that US President Trump had chosen FOMC Board Member Jerome Powell as the next Chairman of the central bank. The impact that could have had on explicit speculative assets was inherently restrained as it would require a web of expected subsequent implications. Yet, the Dollar could have registered a more hawkish or dovish response if there was one to be had. That said, the Dollar continues to hover just above last week's critical break of the inverse head-and-shoulders 'neckline' around 94. Again, this could have been fully priced in given the media's favor and the WSJ report quoting sources the day before; or it may just be the response we would expect under the assumption that a Powell Fed would look a lot like an extension of Yellen's leadership when it comes to the pace of normalization. Under these conditions, we have to wonder whether the October nonfarm payrolls (NFPs) will be capable of achieving any different level of response from the speculative rank. For risk trends, the net change print will be the focal point as has become the media's bite-size staple. Probability of a December 13 hike and further pace of 2/3 more moves in 2018 - which the Dollar's advantage depends on - will depend more on wage growth. Do remember, that this is a Friday event risk and complacency is arguably the most common feature of the financial landscape.

A genuine movement for the market was registered this past session through the Bank of England (BoE) rate decision - though it wasn't the response we would expect applying the black-and-white assessment to the outcome. The central bank did indeed hike rates as was expected, but the group's statement, inflation report and Governor Carney rhetoric made clear it was a move of the 'one-and-done' varietal. This was a move of necessity because inflation was well beyond target, but authorities are still concerned about the moderate potential of growth and the ultimate impact that Brexit will have. In contrast to the Fed which is normalizing as it is seen as healthy; the BoE is moving out of duress and shows little willingness to bolster the competitiveness of its currency. GBP/USD, EUR/GBP and GBP/NZD were among the more remarkable Sterling moves, but the Pound dropped everywhere. Moving into the final day of the week, I have held onto my EUR/USD short; will keep USD/JPY and NZD/USD as alternative views for the Greenback; marking Pound for its follow through potential and keeping very close eye on Bitcoin. We discuss all of this an more in today's Trading Video. 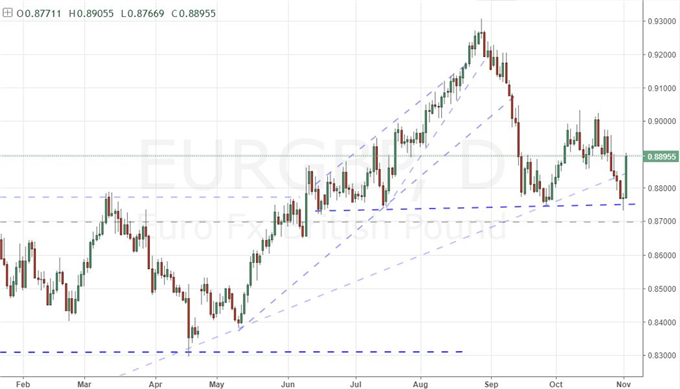 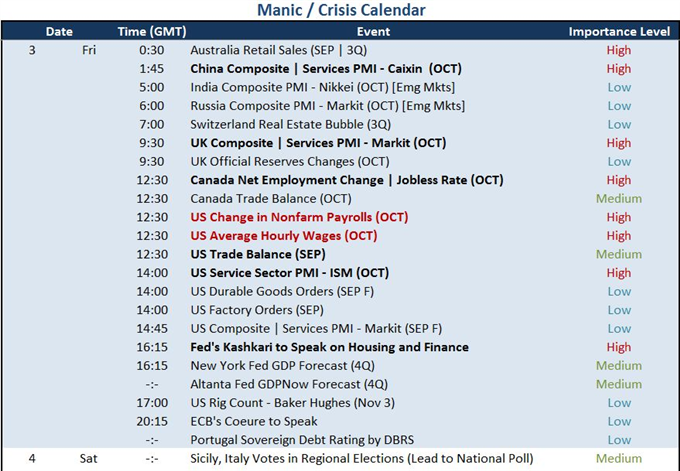 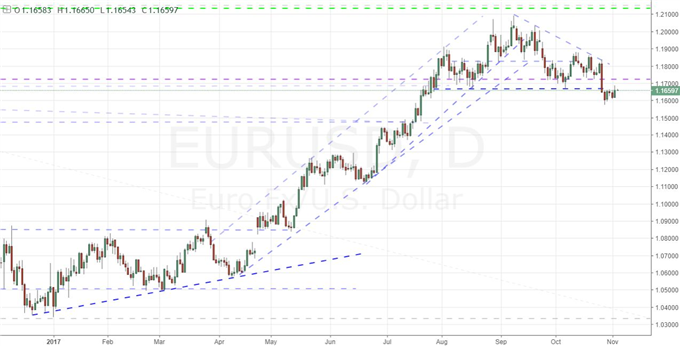