Traders' risk appetite seems impervious to fundamental trouble. Special Counsel Robert Mueller's indictments of former Trump campaign staff strikes a political stability nerve that not too long ago sent benchmarks like the S&P 500 and VIX reeling. In fact, back on May 17th, the story that the President had asked former FBI Director Comey to stop his investigation into National Security Advisor Michael Flynn led to a sharp 1.8 percent tumble for the benchmark US equity index - still the largest drop in 13 months. This week's news doesn't even generate a wobble. Nor have developments in North Korean tensions, hawkish turns in global monetary policy or the floundering of long-held economic collaborations scuttled the rise in low-return capital markets. Optimists may consider this a new era of unshakeable investor confidence that no longer follows traditional means for assigning value. I am more skeptical with a view that we are instead testing the bounds of complacency and a vicious cycle of speculative reach that compensates for a scarcity of yield.

Regardless of the permanence of current sentiment trends, the S&P 500 has managed to close out a seventh consecutive month of advance. That matches the longest series of the gains since May 2013, and we haven't seen a longer series of bullish performance (8 months) since January 2007. Other indices the world over have not fared as well nor have other assets squarely on the risk spectrum (emerging markets, commodities, junk bonds, etc) performed with such ambition. Perhaps the rest of this week's high profile can foster more emergent trends - even if that doesn't include a long-awaited change in speculative trade winds. Top event risk for the upcoming session is particularly well suited to stirring up market reaction. The Federal Reserve's monetary policy decision carries some of the greatest potential of any scheduled event. Yet, this particular decision comes with remarkably clear anticipation for the outcome. Both swaps and Fed Fund futures are pricing in zero chance of a move at this gathering, while those same markets are pricing in a 83 and 98 percent chance of a hike on December 13th. Given the widening gap that the US central bank is opening with other key authorities like the ECB and BoJ, holding the course can still confer significant advantage.

The Dollar could use a strong push from the Fed as it has lost motivation for its drive immediately following a critical technical break. A critical break of a 'neckline' on a three-month inverse head-and-shoulders pattern this past week requires a charge in order to facilitate conviction for a reversal of a trend that has developed throughout 2017. In the meantime, other fundamental themes are competing for influence. The Bank of Japan's rate decision this past session offered no change from what is now the most extreme easing effort among the world's largest central banks. Ahead, the Bank of England rate decision on Thursday comes loaded with high level speculation of a rate hike. While we look for support to nascent and mature trends across the market, Bitcoin was supported by a headline that may represent a systemic change in the use of the cryptocurrency in the financial system. The Chicago Mercantile Exchange (CME) announced its intention to introduce Bitcoin futures contracts starting in the fourth quarter pending regulatory approval. It comes as no surprise therefore that BTC/USD hit a record high on the day. We discuss all the major developments of the past session and the event risk for the upcoming 48 hours in today's Trading Video. 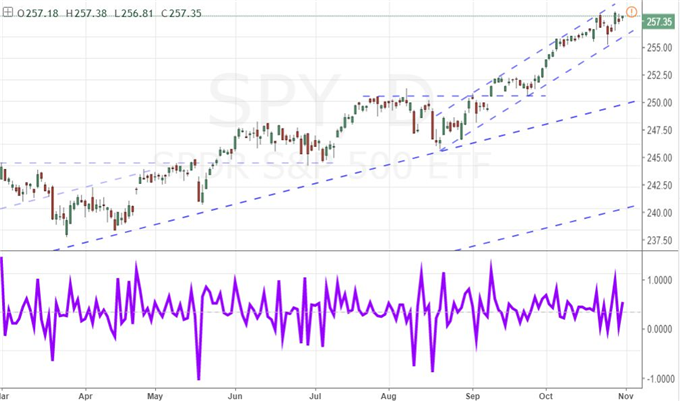 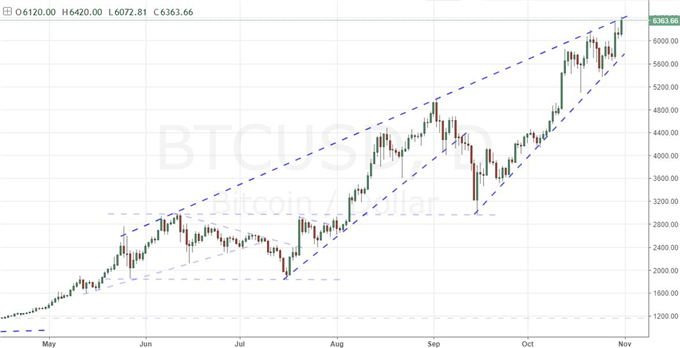