We have seen the focus on monetary policy standings increase substantially over the past weeks and months with a few significant changes in tide from hawkish to dovish. Now its the RBNZ's turn to chart its course through this speculative map. Join me as I cover the event live, you can sign up for the event on the DailyFX Webinar Calendar page.

The escalating tension between the US and North Korea poses a serious threat to global stability and financial markets, but it seems traders' attention is quick to fade unless the fire continues to build. We have not seen any further official remarks from either country or their leaders since North Korea's Foreign Minister stated that President Trump's remarks over the weekend (which suggested the Kim Jong-un would not remain leader of his country for much longer) were tantamount to declaring war. The threat of shooting down US bombers straying too close to the belligerent state's borders still hangs in the air. This is a dangerous situation to grow complacent with, but that is exactly how the markets seem to be positioned - as if nothing could go wrong. The S&P 500 still holds close to its record highs while the VIX volatility is just off of its indulgent 10 level. Even the VXV medium-term volatility (essentially the insurance cost for three months out) is holding just off of recent record lows. In such a willfully complacent market with excessive exposure and extremely low yield, it is easy to appreciate the threat of a surprise or misstep.

Where the benchmarks for general speculative activity have unconvincingly stalled, the Dollar has gained greater traction this week. The benchmark currency that has been battered throughout 2017 and is in a position to leverage a recovery with the right motivation. That motivation can prove a growing appetite for a safe haven, but the Greenback's particular brand of appeal is more geared towards need for an absolute liquidity haven rather than a more simplistic outlet for those fleeing excessive risk exposure. A more productive boost for the US currency is its status in the monetary policy spectrum. This is where much of the Greenback's retreat has been forged, so it is can more readily be inspired to recovery via this channel. There have been plenty of Fed officials on the docket - and will be plenty more moving forward - to motivate the Dollar. On the dovish end of the spectrum, Kocherlakota reiterated his concern that rate hikes already pursued may have already led to damage to the economy. On the other hand, Chair Janet Yellen's remarks this past session that they need to be mindful of moving too slowly perhaps carries a little more weight given her status and consistent neutral standing. The Dollar took notice with another meaningful technical break higher for the DXY Index which translated into an inverse head-and-shoulders 'neckline break'. There is considerable potential in this progress.

Ahead, there will be another round of Fed speak, but nothing that immediately stands out as carrying the kind of weight that Yellen's remarks held this past session. Off docket, the approach of the 'illegal' Catalonia region's referendum vote on Sunday represents another existential - albeit, smaller - threat to the Euro. For the Sterling, Brexit hope is once again being doused in cold water with EU President Donald Tusk remarking progress on negotiations was far too slow despite UK Prime Minister Theresa May's speech last week. The best performing of the majors this past session was the Canadian Dollar with the country's Finance Minister remarking that the economy perform regardless of the higher currency. We will see whether BoC Governor Carney's speech and presser ahead can add to this movement. Top event risk moving forward is the RBNZ rate decision. While the central bank is not expected to move at this particular meeting, signal of intention moving forward is critical for this carry currency. We discuss what is moving in the markets in today's Trading Video. 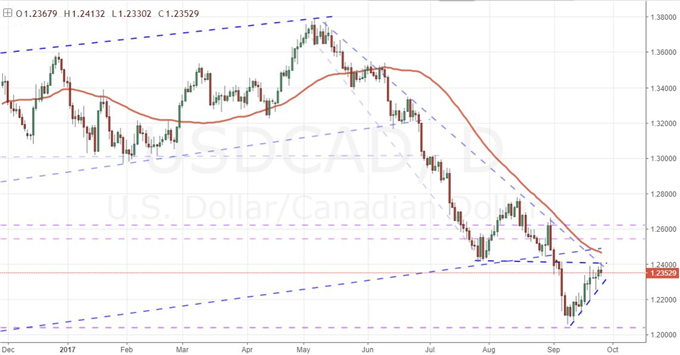 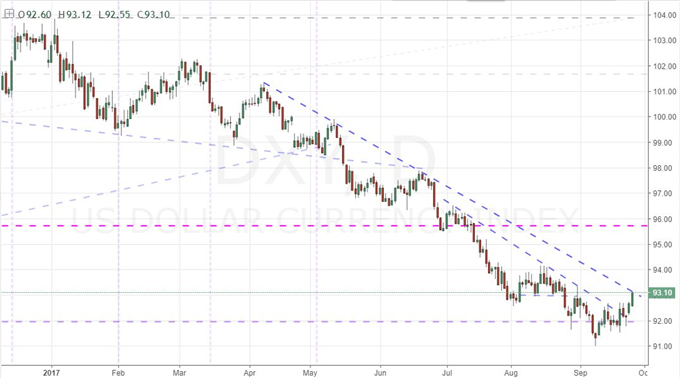 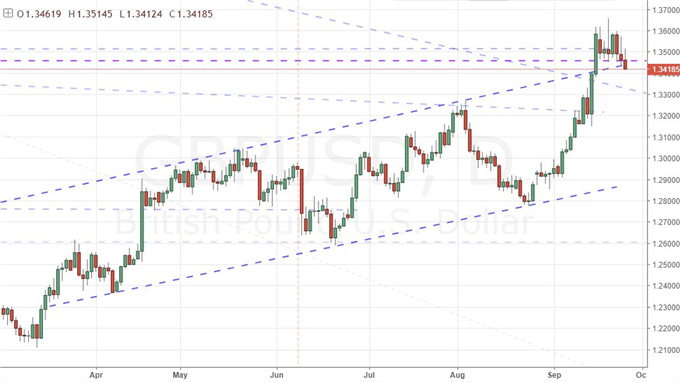 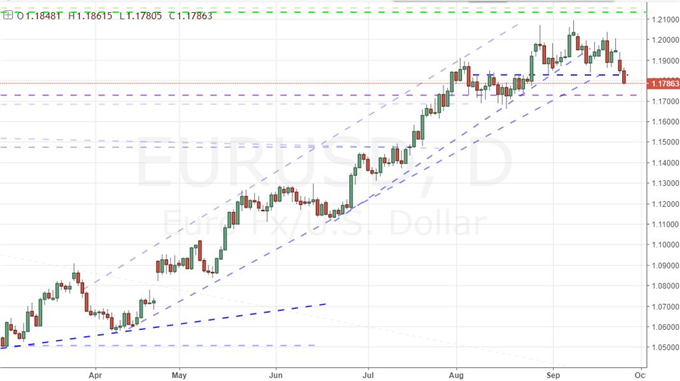