SPX Wavers but Holds, VIX Below 10, Pound Ready for Volatility

Risk appetite still stands after the Federal Reserve pulled the trigger on its balance sheet reduction plans Wednesday. But don't get too comfortable settling back into the complacent, long-risk trades. A simple look at the S&P 500's performance around previous Fed decisions, the event often marks inflection points; but it doesn't often mark an abrupt reversal from this and other benchmarks. What's more, speculative reach has been building up for years with complacency calcifying around a lack of meaningful return and plenty of instances of investors feeling they have been left behind for exercising reasonable caution. It takes either an overwhelming crisis to shake this lethargy or it is a reality that will take time to spread throughout the financial system. I believe we are looking at the latter situation - which is encouraging as it is the less destructive path. But, even if the Fed decision were not registered this week, the S&P 500's inebriated hold at record highs and VIX's plunge back below 10 should raise red flags for market participants that weren't fully committed and confident in the sanctity of complacency.

The other side of the Federal Reserve's recent policy escalation is the Dollar's reticence to recover lost ground even though its forward yield advantage is rising once again. While the Greenback has made some headway with pairs like USDJPY, my interest is the rebalance of deeper speculative drives like the strong climb from EURUSD. A prominent head-and-shoulders pattern atop a remarkable bull trend remains. ECB President Mario Draghi spoke Thursday with traders seeing a prod at the exchange rate, but no resolution. The central banker is due to speak again Friday with traders ready to respond on any commentary that reads like a commitment to slow or expedite the withdrawal of accommodation. With the media blackout passed, three Fed officials (Williams, George and Kaplan) are due to speak as well. This docket is just a hint at what is scheduled next week for monetary policy rhetoric. More effective market movement seems to be arising with the non-core and more overt carry currencies. The Aussie Dollar dropped across the board Thursday when the RBA Governor suggested (as others have before) that his policy capacity may have reached its limits. In a similar fashion, the localized impact of the Canadian CPI can cater to the aggressive move from USDCAD and other Loonie pairs as clearly there is fixation on its sudden carry appeal.

Both themes and data considered, the most ominous (or appealing, depending who you are) event ahead is UK Prime Minister Theresa May's scheduled speech on Brexit in Florence. Negotiations between UK and EU delegates have resulted in little more than frustration and blame. Ms May is expected to break the impasse with markets and officials eagerly awaiting details. Yet, this sets up a situation where the Pound's climb over the past months - and particularly the previous few weeks - sets the bar rather high. If she offers concessions that pave the way for a more harmonized separation, GBPUSD and other Sterling pairs can cover much more discount from the post-Brexit vote drop. Yet, it is far easier to disappoint and see recent build up collapse under its own weight. We look at the technicals and fundamentals moving the market and staging trade opportunities in today's Trading Video. 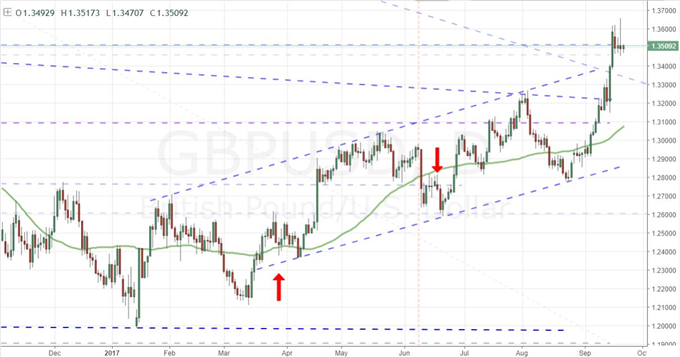 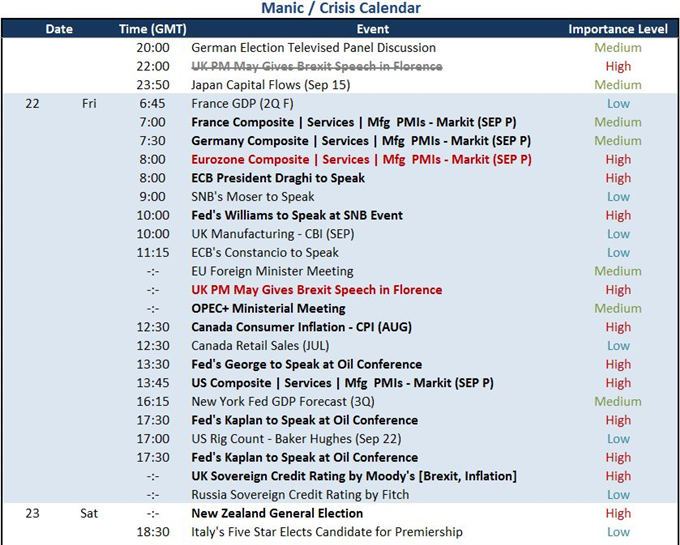 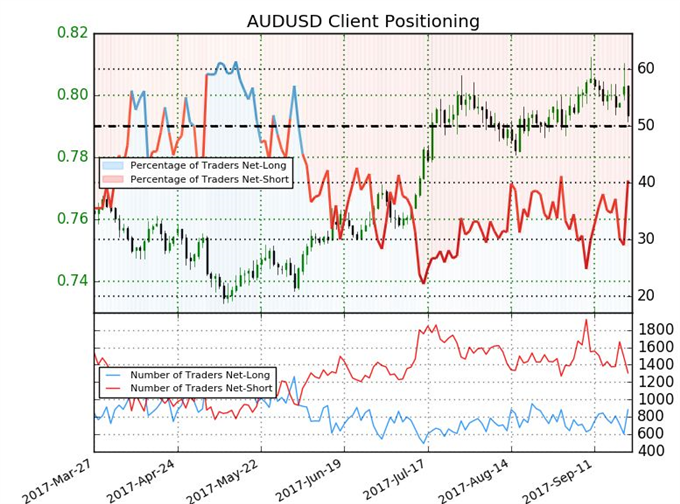