As EUR/USD's slide breaks trendlines, are retail FX traders positioning for a full reversal? How are speculators trading the Pound after the BoE has signaled a hike may soon come? See up-to-date positioning data for both on the DailyFX Sentiment page.

We continue to see isolated examples of active markets - as with the Pound crosses and risk assets overnight - amid a general and persistent deflating volatility for the financial system. Looking across the different asset classes and key benchmarks I regularly monitor, much of the uniform advance in speculative appetite that started this week seems to have burned off. US equity indexes were again little moved (though at record highs), other stock banner carriers were offering divergent performance (the FTSE100 dropped sharply) and en vogue, higher-risk assets like the Emerging Market ETF shows struggle. Testament to the conditions we continue to deal with is the S&P 500's situation - the index is at record highs, yet its past three-day range as a percentage the index's price is the lowest reading I have on record. Yet, there is are hints around the market that complacency is not as robust as we have come to expect. One of those slivers is the VIX. Though still extremely low on a historical basis, it has not fully collapsed to the deflated levels we have come to expect with recent months' full retreats. Dip buying is generating less and less of the sharp volatility it has earned of late. And, if the appetite for these quick rebounds dry up; what remains of speculative appetite?

As we continue to evaluate the evolution of speculative resolve, traders should take note that there is definable event risk through the end of this week that can charge some short-term activity. Overnight, we have the news that North Korea reportedly launched another missile that may have again passed over Japan. Some of the most aggressive swells in volatility over the past months has developed around breaking news related to the hostilities between this belligerent country and other countries. While the frequency of these events - and the noticeable lack of escalation - will likely render shorter and smaller half-lives for market response; if the market is looking for a reason to de-risk, it can find it here. On the event risk front, we have data in Friday's University of Michigan sentiment survey, big ticket listings like next week's FOMC to keep markets looking forward and the quarterly expiration of a wide range of products. It will be important to separate reactive volatility from deep conviction.

An example of surface level market development is the Dollar's effort this week to mount a rebound from multiyear lows. The DXY Index's effort stalled out this past session at noteworthy technical resistance. That move was short-circuited despite a pickup in consumer inflation (CPI) readings for August. It was a modest acceleration of pace, but the headline reading is now near the Fed's target and this is an environment that increasingly favors speculation around hawkish views. It will be difficult to systemically change conviction though with the FOMC rate decision on the immediate horizon. In contrast, there was more genuine conviction to be found in the Pound. The Bank of England didn't hike rates at Thursday's meeting (heavily expected), but it did clearly law out the course for a move in the near future. We have seen what speculation of policy has done for the Euro, Dollar and Canadian Dollar. We discuss the big markets this past session, what the final session is likely to hold and more in today's Trading Video. 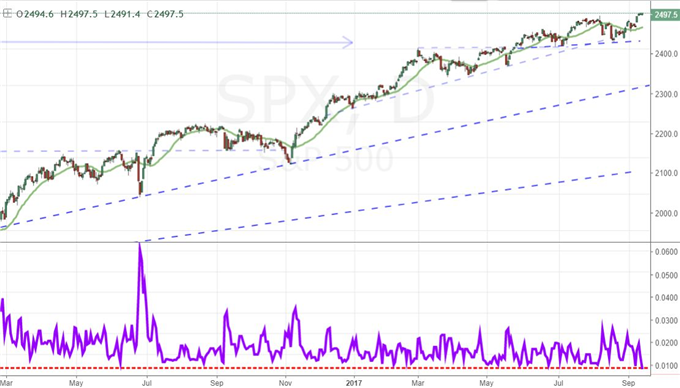