At this point, it seems even a sneeze from the ECB could earn the Euro another 50 pips advance. The benchmark pair advanced this past session amid news on both the ECB's monetary policy efforts as well as the United States' ominous debt ceiling threat. Yet, despite the progress made by the pair, the developments seemed to support a very different outcome than what was realized. For the Dollar, news on Wednesday that US President Donald Trump had worked with Democratic leaders in Congress to delay the debt ceiling and fund the government through the end of the year offered a material relief to the currency's risk of losing its reserve status. That confidence was furthered this past session when it was suggested that the President was supporting an initiative to fully repeal the debt ceiling and thereby make this frequent threat fully resolved. And yet, the Dollar Index slid to clear support that has stretched to the beginning of 2015.

While the trade-weighted ICE Dollar Index may be plunging more than two-and-half-year lows, the same bearish progress is not registering with many of the other critical Greenback benchmarks. An equally-weighted index is still at its floor while the Dow Jones equal index encompassing just EUR/USD, AUD/USD, GBP/USD and USD/JPY hasn't even reached support. Among the pairs, EUR/USD jumped this past session; but it has yet to overtake last week's high - much less the historical range's midpoint around 1.2135. Only AUD/USD has registered a new anti-Dollar low this week. That doesn't negate the currency's bearish lean, but it should give pause to traders looking to take advantage of an active dive. Where the US event risk this past session was encouraging, the Euro's backdrop was decidedly mixed. The ECB decision offered the lack of commitment expected following the previous session's leak that no agreement would be offered at the meeting. Indeed, the group kept policy untouched voiced concern about the persistently weak inflation and elevation of the currency but also voiced optimism about growth, confidence that there are no bubbles and suggested QE decisions would be made next week. Nothing in this event offered a clear hawkish or dovish shift, but the Euro has been driven to exceptional hawkish territory. A lack of fulfillment is a concern for bulls that have stretched the run. And yet, the Euro crosses have yet to slip.

Heading into the final session of the trading week, a weathered eye should be kept on the Dollar, Euro and general 'risk' bearings. We have seen a seasonal transition that has kept volatility levels buoyant and the threat/opportunity of heavy market turnover elevated. Meanwhile, there is more targeted developments in some other corners of the markets. Across the Yen crosses, sentiment trends are a key driver; but bullish or bearish, there are options. I prefer CAD/JPY on a bearish shift in investor confidence while NZD/JPY and USD/JPY offer better technical and fundamental arguments for a bullish turn. As for CAD/JPY, there is additional data to be mindful of in the form of the August employment report - a known market mover. There is much to lose for the strong Canadian Dollar run, but momentum is well established if the update promotes follow through. In terms of an objective data tally, the Pound faces the most dense calendar with trade, inflation expectations and a GDP estimate (from NIESR). That list won't easily translate into market movement however.

The most remarkable - and surprising - move in the FX market has unexpectedly come from the Yuan. The Chinese currency extended its decline abruptly this past session and escalated its two-week tumble to the deepest seen since 1984. Eventually, the Chinese government and PBoC will be interested in a stable exchange rate for the start of the 19th National Congress starting October 18. But, when will they step in to steady this remarkable move? In commodities, both Gold and oil have advanced into areas that some technical traders would argue is meaningful resistance. For crude, that certainly seems the case given its range habits and the confirmed trend of lower highs to 49.50. Alternatively, gold has maintained a rather impressive bull trend and the trendline traced to 1,350 carries limited influence in my good. We discuss all these developments for red herrings and opportunities into the final session of the week with Today's Trading Video. 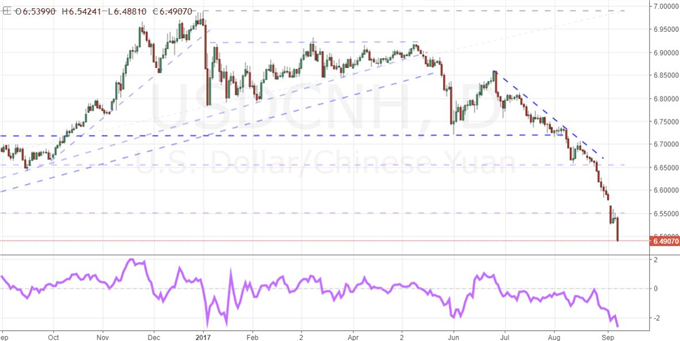 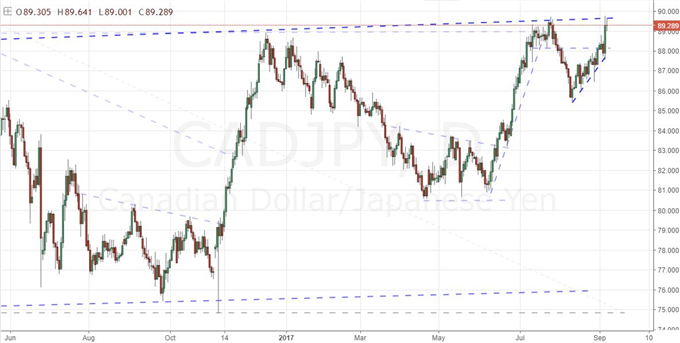 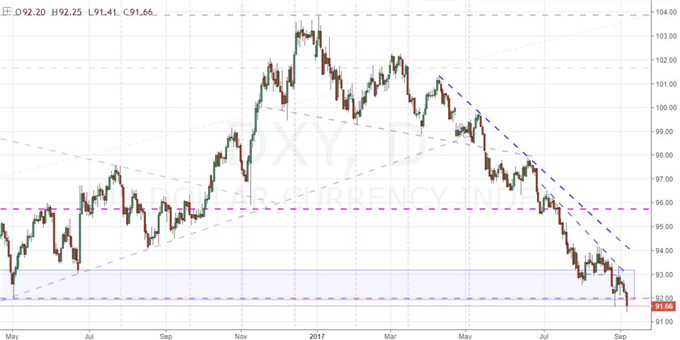