Complacency had finally reached its short-term limit Tuesday when the S&P 500 forced a bullish break on a wedge that had constricted price action over the past two weeks to a level of inactivity unprecedented through history. At the start of the week, the 20-day average true range (ATR) on the benchmark equity index was running at its lowest level relative to spot on record. A break was inevitable, and the move to record highs reflected that development of necessity. Finding some very loose purpose in the report of a record number of available jobs in the US equity (6.16 million) according to the JOLTS report, there was at least something that held fundamental sway. Yet, that is the least influential of the labor statistics historically, which made overriding the constant shadow of skepticism to conviction nearly impossible. The drive evaporated shortly after securing the 'technical' break, and the retreat found further amplifier in a recently restrained fundamental theme: political risk.

While global protectionism and domestic in-fighting for the United States have proven familiar themes for the market headlines as of late, we had so far seen little concern attributed to the escalating tension on the Korean Peninsula as of late. That changed Tuesday when US President Trump decided to raise the stakes of the verbal cold war with the bombastic North Korean leader by warning that escalating actions and language would result in 'fire and fury' from the US. The world super power typically avoids verbal sparring with the unstable country, but these threats with a country reportedly pursuing nuclear weapons generates true concern. That said, we have seen tension with this particular country rise and fall frequently over the years, and these markets have proven themselves to be particularly complacent towards risk. What makes this different? Surrounding conditions are potentially far more disruptive than the headlines themselves. Not only are markets exceptionally expensive, but we have seen the reach among speculators swell to such heights that futures traders have built up a record net short VIX position this past week despite it already holding at an approximate record low around 10.

So far, risk trends have slipped; but they have not indicated a true reversal. That said, there is a lot to lose and little to gain to hold on to stretched speculative views. Traders should remain wary of the growing gap between probability (the likelihood that we can push 'risk on' even further) and potential (how much run that stretch can feasible return). While US shares have slipped and the VIX popped back up to 11, we have yet to see it spread to the global financial system. Meanwhile, the opportunities should risk trends escalate in the FX market present appealing technical pictures. The Dollar and Yen stand to benefit from a flight to safety and a deleveraging of loosely held carry respectively. Pairs like EUR/USD, AUD/USD, EUR/JPY and CAD/JPY are a few good technical and fundamental combos; but consider the likes of USD/JPY in this mix. Meanwhile, top event risk ahead is the RBNZ rate decision. This holds significant importance for the New Zealand Dollar as anticipation has turned meaningfully hawkish recently alongside the Australian and Canadian Dollars. That said, we have deflated some of the leverage possible in a one-sided and stretched hawkish view for reversal with the recent retreat from NZD/USD and other crosses. We discuss the possible drivers and appealing scenarios ahead for the market in today's Trading Video. 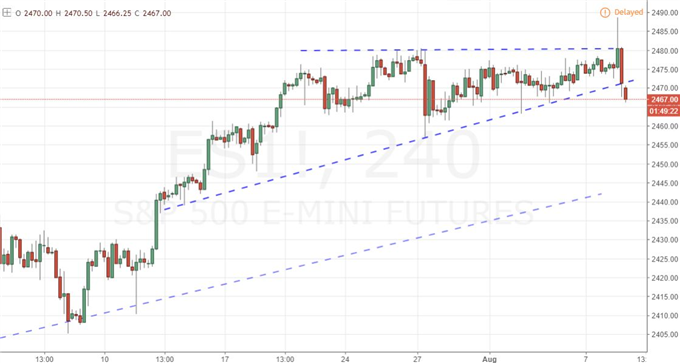 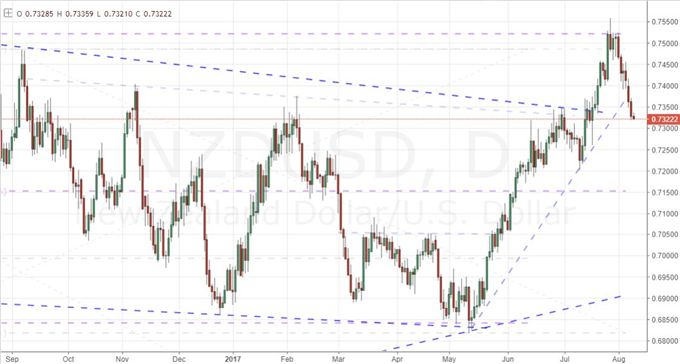 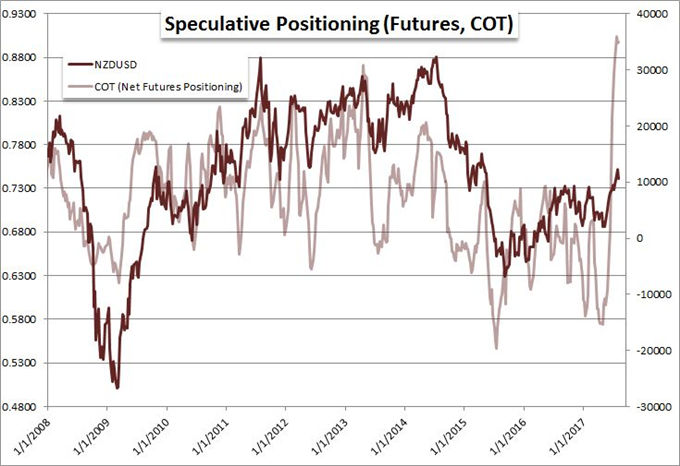