Despite the alignment of technical and fundamental development to close this past week, the Dollar's ambitions have yet to translate into a definitive trend reversal to start this week. When we judge the depth of the fundamental cue versus the limiting conditions of the broader financial system, the lack of follow through comes as little surprise. The July NFPs suite spoke to a robust labor backdrop for the United States which in turn supported a hawkish lean from the Federal Reserve. Yet, we have known that to be the case for some time, and the markets have priced in a hawkish advantage for the Greenback years ago. The debate of value on monetary policy has increased and the explicit advantage the Dollar has afforded itself in its hawkish standing is not explicit and valuable enough to override the speculative actions that increasingly prize volatility over value. The Greenback's reticence aligns nicely to the general zone of support the DXY Dollar index has established over the past two-and-a-half years, but it has left the market's to considerable debate with some of the majors.

For the EUR/USD in particular, the technical break was already made. The benchmark currency cross - and arguably financial asset - cleared 1.1750 (the 38.2% Fibonacci retracement of the past years' range as well as the range resistance back to the beginning of 2015) to extend the next leg. With the pullback felt on Friday, we have seen a retest of former resistance as new support. Many speculators would consider this a move of confirmation for projecting the trend. Yet, such a development with no verified conviction is more often a crash through technical boundaries with little promotion of trade opportunity. A similar premature detonation can be seen with AUD/USD above 0.7850 (still holding) and GBP/USD beyond 1.3100 (a level that has since fallen as support) among other pairs. Looking for what can fuel the next Greenback move - bullish or bearish - we have little in the way of scheduled event risk to anchor expectations. Themes like sentiment, relative monetary policy and political intrigue can provide; but we cannot depend on them. Conditions therefore are the defining feature, and there we have the results of concentrated speculation and regular debate over bubbles.

In the 'risk' arena, we have the extremely low reading on the VIX (back below 10 Monday) against the proximity of record or multi-year highs of global equity indexes. That is a concern for conviction. Further, we have a disparity in these assets that suggests that investor confidence is flagging and giving way to speculative reach. We have seen a divergence between assets such as carry and emerging markets, between global equities and those in the US, and even between US indexes. From the Nasdaq Composite, we have seen a the signs of a reversal pattern while the Dow Jones Industrial Average has posted only its 9th 10-plus day consecutive rally in over 50 years. When correlations across these speculatively-tuned assets diminishes, it is a strong indication that sentiment has lost traction. In other markets, we find targeted volatility that better suits the capabilities of these markets - limited duration, measured distance but potentially strong intensity. Among the FX crosses, the Swiss Franc and Yen pairings have a number of appealing technical patterns - but limited drive. For fundamental tail wind, the New Zealand Dollar has tipped into tempting reversals with pairs like NZD/USD and NZD/JPY; but the extension or reversal of this suitable development likely rests with Wednesday's RBNZ decision. Elsewhere, Bitcoin added as much as 20 percent from trough to peak over the weekend and into Monday, gold and oil are set for subsequent moves and the VIX continues to look overburdened. We look at the practical side of trading these markets in today's Trading Video. 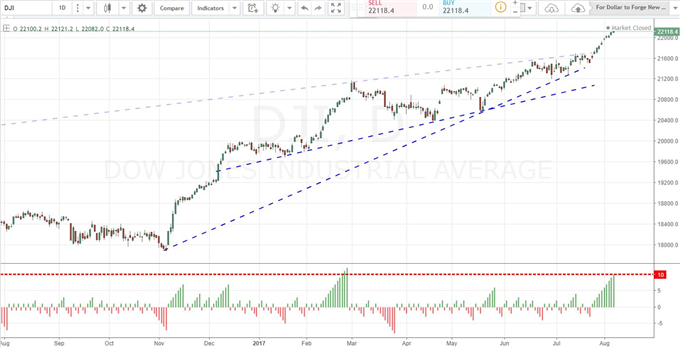 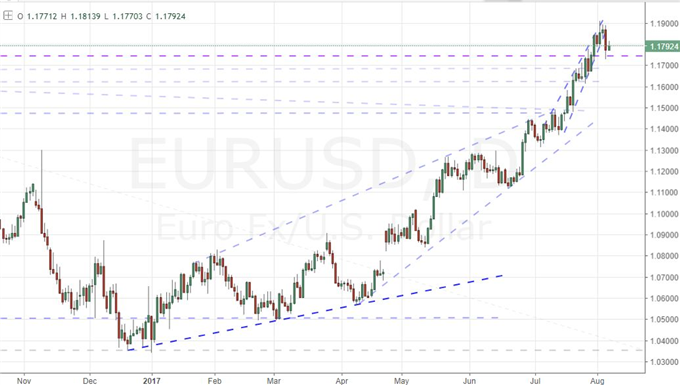 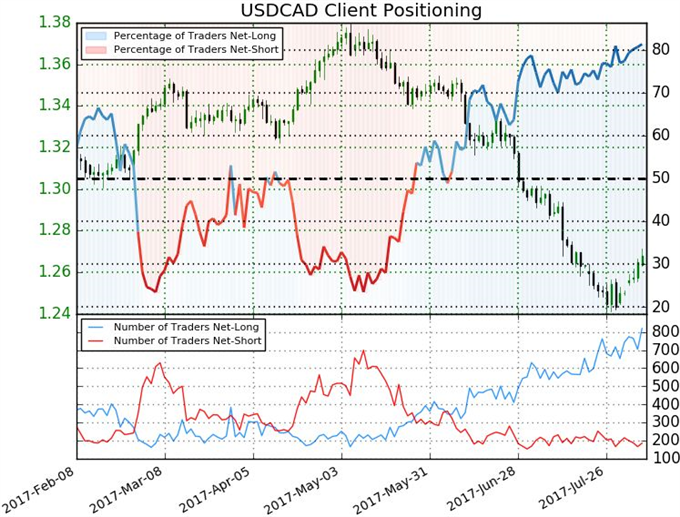 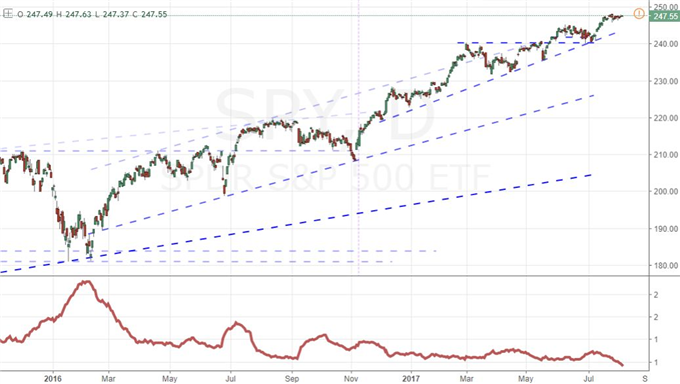