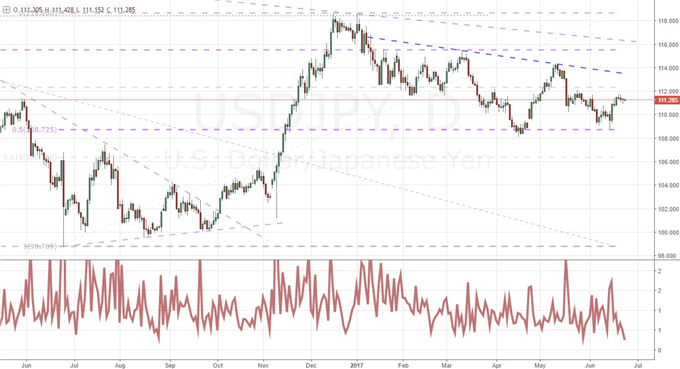 One thing is clear: if we expect big moves from these markets, we will need something to catalyze volatility or fuel trend. In the absence of provocation, the convergence of seasonal lull and structural complacency will discourage any heroic speculative moves. There is a range of event risk that can metabolize more critical themes through the week ahead, but the critical tipping point won't be lowered for speculators. Through the end of this week, speculative benchmarks reaffirmed the comfort in holding a leveraged risk exposure. The VIX volatility index slipped back to 10 - just barely closing above this extreme threshold. The S&P 500, emerging market ETF and high yield fixed income ETF all clawed back their tentative losses to keep within range of multi-year or record highs. On the FX side, USD/JPY carved out its smallest non-holiday daily range in nearly three years and rounded out an extraordinarily small four-day range in the process.

Scheduled event risk this past week was tepid, but Friday represented the pinnacle of effort to leverage a fundamental response. EUR/USD itself had more than its fair share of opportunity of a week ending volley - though no dramatic move would be found. On the Dollar side, the Fed speak (Bullard and Mester) took a somewhat dovish shift while the US PMI figures conformed to the global downshift in economic activity. From the Euro, neither the EU leader summit nor the weak Euro-area PMIs would override the otherwise inert sense of concern shielding the currency from otherwise prominent burdens. An upgrade on Greece's credit rating by Moody's on the other hand will be similarly viewed with skepticism. Important to watch for next week is whether news of the ECB two Italian banks as failing or likely to fail will touch off another stage of financial concern for a stressed financial sector. Meanwhile, the Dollar-based opportunity in USD/CAD similarly suffered despite a weak Canadian CPI figure helping to produce another channel bounce; and US crude further fought off hopes that its 44 break could provide a productive bear trend having stalled out this past week.

With the haze of further liquidity drain with the US Fourth of July holiday just over the horizon, the need for motivation is even greater. That said, there will be plenty of individual sparks to light the fuses of bigger trends through the coming week. US monetary policy will receive considerable attention with the monthly PCE deflator statistics - the Fed-favorite inflation data. Yet, the more charged event will be FOMC Chair Janet Yellen's discussion of global economic risks. The consumer confidence survey and supposed vote on the Senate proposed tax bill will stoke another avenue of possible volatility: political risk. Relative monetary policy is capable of stirring measured moves for the Dollar and other currencies, but we should keep our eyes forward and consider the collective policy influence on risk trends. A forum on central banking which will bring together the heads of the ECB, BoJ, BoE and BoC will give a big picture barometer reading on where the dovish scale is set in global policy. Brexit debate should be watched closely as it has acute influence over the Pound and is not readily plotted out for specific releases. And, from two of the market's biggest movers as of late - oil and Bitcoin - we should not only look for further swings, just as important is their ability to define the upper threshold of volatility and trade opportunity. We take a look at what the trading landscape looks like through the week ahead in this Trading Video. 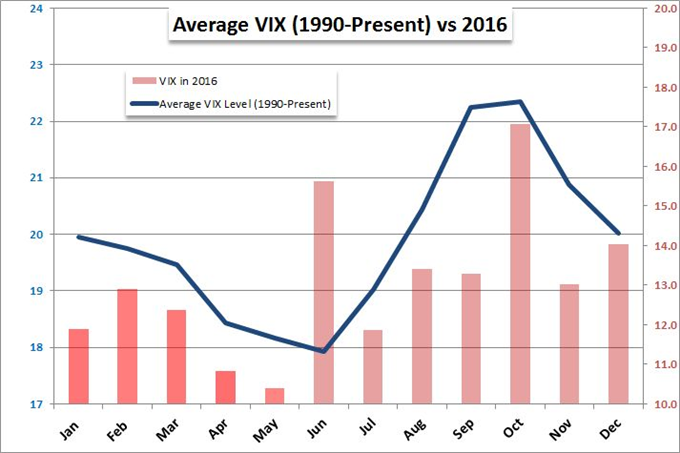 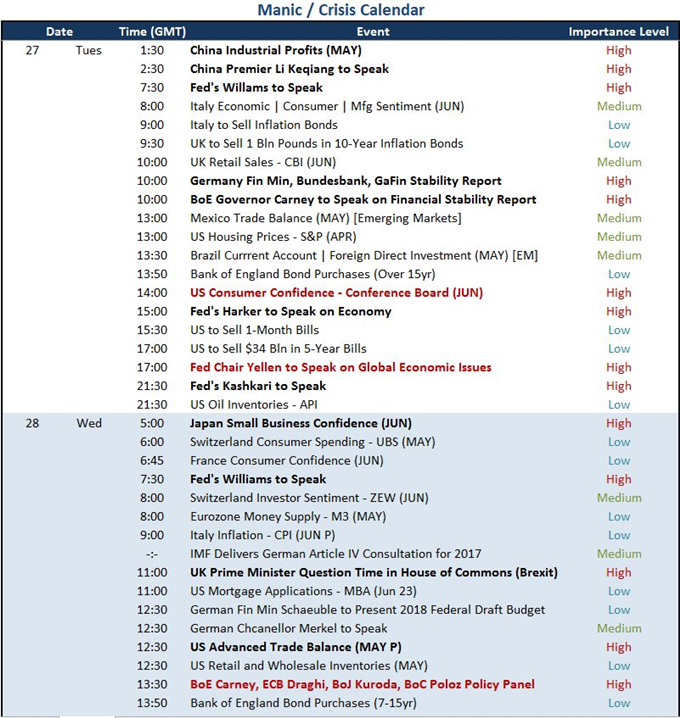