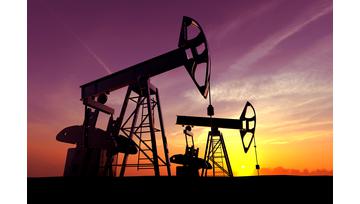 See how retail traders are positioning in EUR/USD as the reversal slows or US oil after the break of major support at 44? Analyze the DailyFX speculative positioning data on the sentiment page.

It is difficult to override universal market forces. Risk trends have cemented the sense of complacency riff throughout the global financial system with choppy advance to multi-year or record highs for the most speculative assets and a steady deflating of the already grounded volatility measures. Those few assets that made an effort to break through the atmosphere of complacency this week have been knocked back. Crude oil's high profile technical break below 44 mid-week has drawn some of the greatest interest with hope that supply-demand fundamentals will pull the commodity off the speculative track. Yet, the laws of financial physics are not bent long, as the natural resource bounced through Thursday's session. That move not only jeopardizes on of the few promising trends in a world of ranges, but it cut down the USD/CAD's range reversal. The pair's technical and fundamental backdrop still looks appealing, but general conditions must not be a hurdle if it is to make progress.

Another outperformer this week were markets in China. Its equities had surged after the news that ETF giant MSCI had ruled to accept a list of A-share stocks of mainland Chinese firms. That had a similar effect for the country's international financial legitimacy as the IMF's acceptance of the Yuan into the SDR basket. Yet, just as significant resistance had come into view for benchmarks like the Shanghai Composite, a member of the China Banking Regulatory Commission rattled nerves when it was announced some banks were told to review their lending as some corporations may pose a systemic risk given their scale and financial situations. Meanwhile, potential from a new Senate health care bill was nonexistent as the markets have hardened their optimism towards expectations of fast-tracked policy adoption after so many falters. The 'Trump rally' has added considerable premium to critical market pillars like the S&P 500. There is a real risk that if tangible economic traction is not soon found, this latest speculatively-derived rally can tip a more significant reversal.

That concern will be weighed upon in the upcoming session. Credit rating agency Moody's is due to update on four countries sovereign ratings. While reviews of Greece, Germany and France are certainly important to the evaluation of a struggling Europe; it is the assessment of the United States' outlook that can carry the greatest risk. Not only are the growth forecasts based on political programs at risk, but the market's own richly-held expectations face a troubling dose of reality that can undermine speculative runs. Fed speak will be another feature on the fundamental landscape Friday, but the otherwise remarkable views offered by various officials earlier this week did little for the probabilities given to future policy course corrections and thereby the Dollar. Yet, one more elemental theme may soon prove a critical tipping point for a world built upon speculation: actual growth. We are still weeks away from the first of the western world GDP figures for 2Q, but we will essentially see how they are likely to print today with the June PMI figures set for release. These growth measures are due for Japan, Europe (Eurozone, Germany, France, etc) and the United States. What ultimately pushes us into a broad financial market dive will be the reality that speculation has far exceeded legitimate financial and economic performance. What flips that light remains to be seen. We discuss trading through the final day of the week in today's Trading Video. 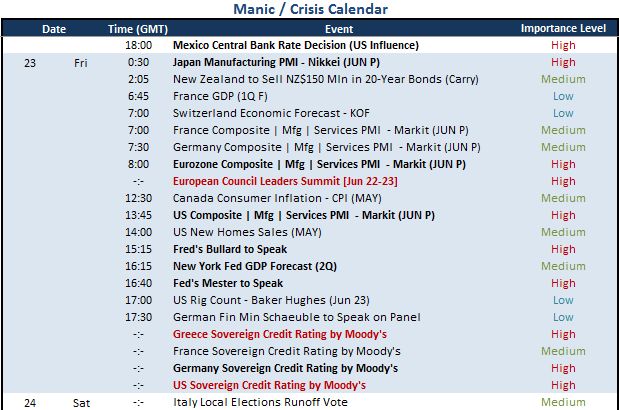