Is Fed Speak Enough to Force a EUR/USD Head-and-Shoulders Break?

The Fed's decision to hike rates may motivate the RBNZ to follow suit. Sign up for the live coverage of the event and see how the central bank's decision effects the New Zealand Dollar on the DailyFX Live Webinar Calendar.

The influence of this past week's heavy event risk still hangs over the markets - but that lingering unease doesn't seem motivation enough to escalate volatility into long-overdue trends. Benchmarks for sentiment like the S&P 500 are almost always the first place to look at the start of any week to gauge the phase of speculative appetite in the financial system. From the US equity index we would find the now familiar extension of confidence that looks increasingly like a troubling mix of complacency and speculative reach. Statistics at these levels fall on deaf ears, but it is worth nothing that we are now 250 days of spot running above the 200-day moving average and 2,078 trading days since the last technical bear trend (a 20 percent correction from record highs). Meanwhile, the VIX volatility index shows concern among equity traders continues to flit around 10.

The questionable sense of confidence seems to be spilling over to other asset classes. We see similar quiet in volatility indexes for gold (GVZ at a series low) and emerging markets. The FX-wide volatility has dropped to its lowest level since the trough of the 2014 'Summer Doldrums' despite the rise of monetary policy disparity and geopolitical tensions. The CBOE's EUR/USD-based volatility measure (EVZ) hit a similar low which in turn puts the currency pair in an awkward position. Having stalled below the 1.1300 resistance that has traced out a number of descending turning points, EUR/USD seems to have carved out a clear head-and-shoulders reversal pattern. Each day that passes whereby this pair refuses to commit to a clear bearing will only build anxiety for the broader currency market. If monetary policy were to be the cue for this pair or the Dollar to make its next committed move, Monday's session provided a clear foothold. FOMC Board member Dudley offered a hawkish view for one or more further hikes in 2017 as well as a message of confidence despite the slip in inflation pressures. While the Dollar moved higher on the day, it is questionable how much of this was inspired by the hawkish rate message. We will have plenty more Fed speak to test this channel of fundamental influence.

For a different 'major,' the British Pound received little definitive inspiration from the official start of Brexit negotiations between the UK and EU. A reduction in uncertainty for the course this divorce will take is a chance to regain lost ground for the Sterling a year ago. Yet, after the country's election left Prime Minister Theresa May without a clear mandate for a tough negotiation stance when the government meets its peers, we are again left with uncertainty as our primary state of being. With a thin docket for the next 24 hours (RBA minutes, an economist survey of the UK's prospects from Bloomberg, the MSCI's ruling on including Chinese shares in its EM ETFs), major developments will likely come from open-ended themes. Risk trends will remain one of the critical concerns alongside diverging monetary policy and geopolitical tensions. We discuss the event risk and general themes for trade potential ahead in today's Trading Video. 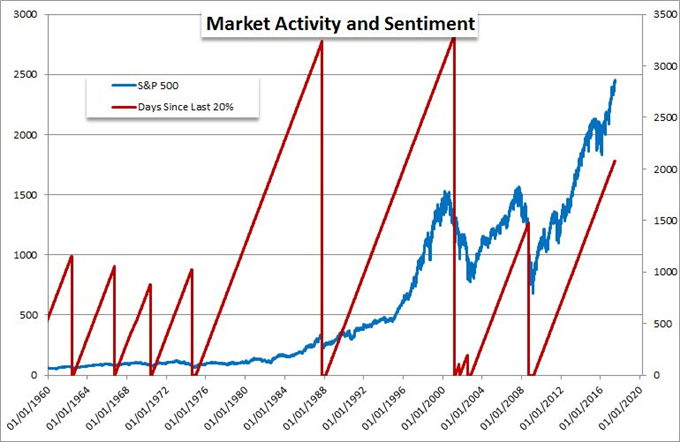