Gauge speculators' conviction in the Dollar, Euro and Pound moves by watching how they position on the key pairs on the DailyFX Sentiment Page.

This past session's scene of high profile event risk didn't follow the expected script. The Dollar, Euro and Pound were all put into motion after their respective events; but in each instance, the initial intensity of the move should not be used to extrapolate the market's ultimate trend for these benchmarks. Top concern this past session was the former FBI Director James Comey's testimony before the Senate Intelligence Committee. Political risk remains one of the least defused of the major fundamental themes to this point. What's more, the landscape in the US is already tense as evidenced by the May 16th gap lower for the S&P 500 in response to headlines on obstruction claims. While the event seemed to be a feast for political beat writers, the market implications - threats to progress behind tax reform and infrastructure spending - were limited. While the equity market didn't take the occasion to extend an already-stretched bull run, the Dollar did ease up out of its multi-month slide.

On the opposite end of the scale for market moving potential, the ECB rate decision proved far more productive for the Euro than I thought possible. As expected, ECB President Mario Draghi didn't significantly alter his cautious, dovish tone. Yet, the market's anticipation of measurable steps towards the eventual accommodation exit seemed to have put it at an easy position for disappointment. When Draghi maintained his support for the current phase of stimulus and shot down questions of rate hikes before the stimulus program ran its course or whether the QE exit plan was already being shaped, the market's perhaps understood it had pushed its front-run effort to far, too fast. For EUR/USD, relief from the currencies' respective, persistent trends presents the kind of setup that fits market conditions. A pull back within a broader range can forge a meaningful move for the pair without reaching beyond the threshold of what is feasible in current financial conditions. Expectations of ambitious trends should be evaluated against the knowledge that there is a heavily anticipated Fed rate hike scheduled next week. Measured exposure, objectives and ambition are still necessary virtues of these markets.

Through the final session of the week, the Pound will remain the most at-risk currency for volatility. The UK capital markets will similarly be on tenterhooks. In the FX market, the Sterling was hands down the biggest mover this past session. The afterhours report of the general election's initial exit polls delivered a surprise to market participants who once again grew complacent in their certainty of a 'status quo' outcome. Against markets pricing an 85 percent probability that the Conservative party would maintain a majority in Parliament, the first reading suggested the ruling party had lost 17 seats and consequently lost its control for driving forward policy. This is interpreted as a bearish development for the Pound because it makes the Brexit path that much more uncertain - uncertainty that translates into risk for investors. The 2015 general election stands as recent evidence that initial readings can be reversed, so traders should hold off on placing their strong conviction Sterling trades. Expect any trends for GBP/USD and the other Pound crosses to come only after the tally is more definitive. We discuss what is moving markets now and can drive them ahead in today's Trading Video. 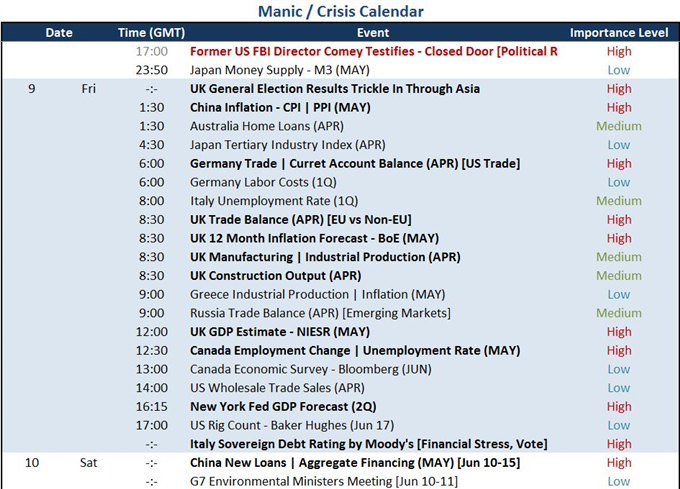 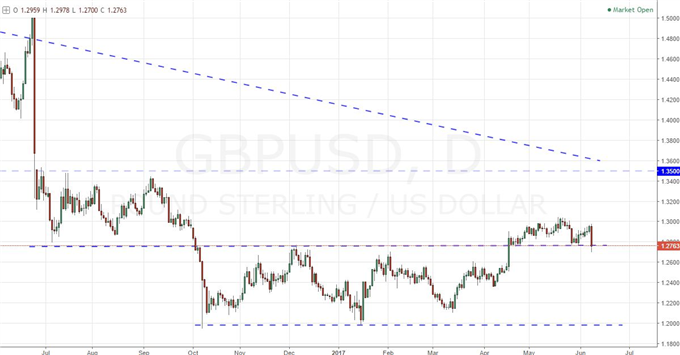