See how retail traders are positioning in the FX majors, indices, gold and oil in intraday using the DailyFX speculative positioning data on the sentiment page.

Markets have essentially ground to a halt and complacency reigns looking at the indecision from the likes of global equity indexes, the Dollar and other benchmarks. But the speculative positioning behind them is anything but stoic. Conviction can sometimes be difficult to muster amid a divergence in expectations; but when there remains a greater degree of exposure and/or a heavy change in bearing behind a market, the potential of a strong price-development remains exceptionally high.

Looking at the speculative positioning development figures, we have seen some extreme build over the months, but some of those levels and changes have hit particularly remarkable pace/degrees recently. We look at a few of the highlights and their possible implications for the broader financial system.

The Market’s Haven Versus Its Standard Return Vehicle

In the traditional, hypothetical portfolio, there is a ratio of stocks to bonds that is optimized for risk and return. Those conventions have waned with time and the opening of the financial system. Recently, the convention has been fully turned on its head with complacency on the rise and the availability of meaningful yield all but vanishing.

For Treasuries – the consummate safe haven – the rise of QE led to an unorthodox flip in motivation that transitioned into a speculative outlet for those looking to front run the central bank’s efforts. As the Fed has started to back out of its easy police with hikes and the early suggestion of stimulus wind down, we have witnessed a record breaking swing in net short exposure to an equivalent net short (flipped below to reflect yields). 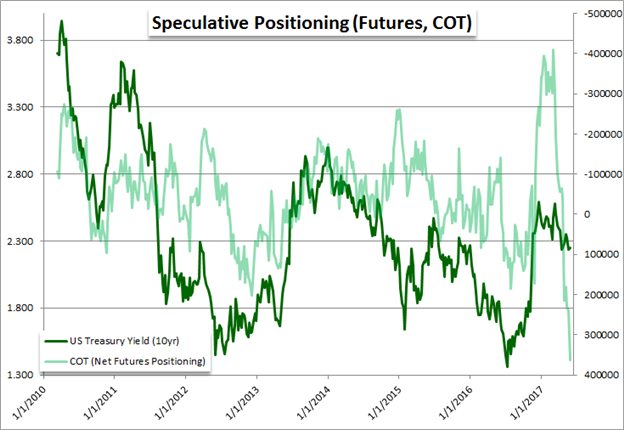 Equities in contrast have remained a favorite outlet for those looking for outright capital gains. No other benchmark has outperformed the S&P 500 for example amongst the major risk-oriented assets since the bottom was set after the Great Financial Crisis. Optimism surged this past six months particularly for the Russell 2000, but that appetite has completely reversed course as complacency has persisted. 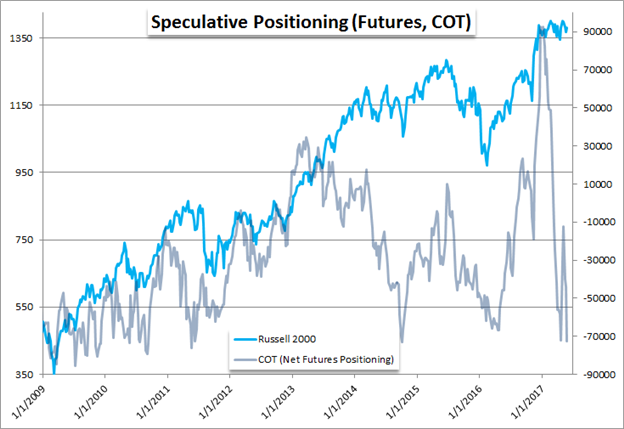 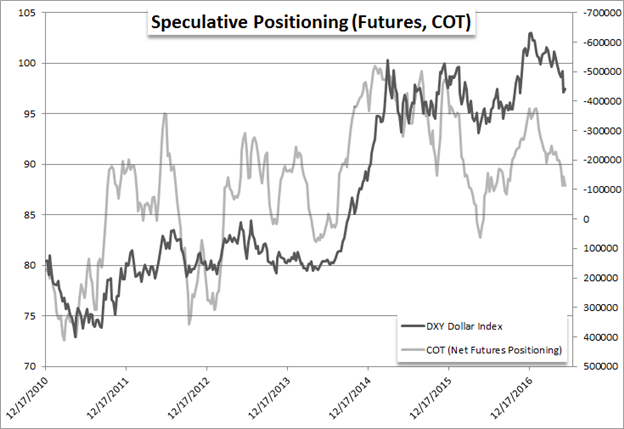 From the world’s most liquid exchange rate and one of the most active futures markets, EUR/USD positioning has deviated aggressively since the early 2015 low. With an intensification of correlation between market activity and position, we have seen net speculative interest turn to its most aggressive net long position since late 2013. 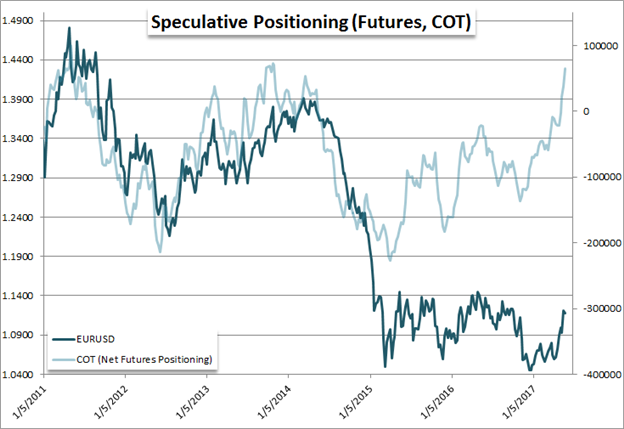 Another of the majors, GBP/USD has seen some relief from its three decade low dredge over the past six months. While the rebound has been noteworthy, it has barely registered compared to the Brexit tumble and more robust moves for other pairs. Despite the measured price base move, the balance of exposure has quickly eased up, dropping to a fifth of the net short set at the beginning of the year. 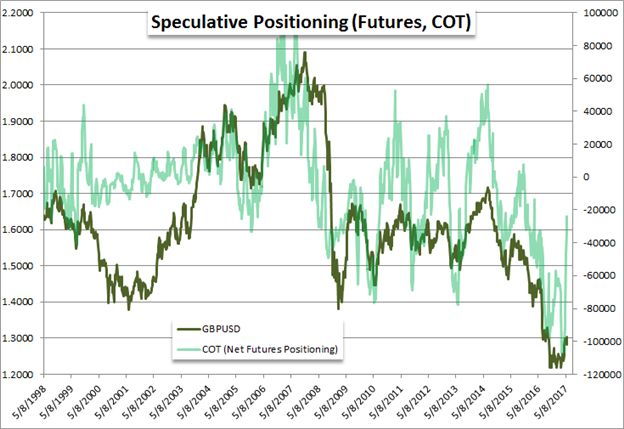 Arguably the most remarkable extreme amongst the majors comes from a pair that isn’t considered a top Dollar-based pairing. USD/CAD has posted a bearish swing within a rising bull trend recently, but that correction didn’t register with net speculative futures exposure. This past week, the net short USD/CAD position hit a record (flipped in the image below) that easily overshot the general extremes tested over the past there years. 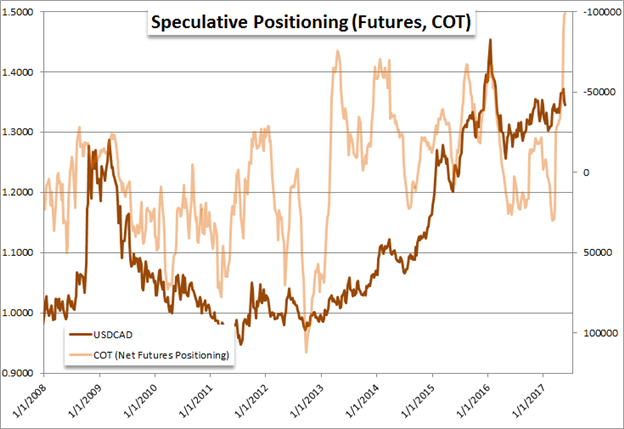 Speculative Favorites Show the Boundaries are Being Pushed

Oil remains one of the most heavily traded futures market out there. Over a longer horizon, the long exposure for the pair is still extreme on a historical basis. That said, the past few months have seen a substantial correction. With ranges holding strong for the underlying market, it is likely that the one track view will start to retreat. 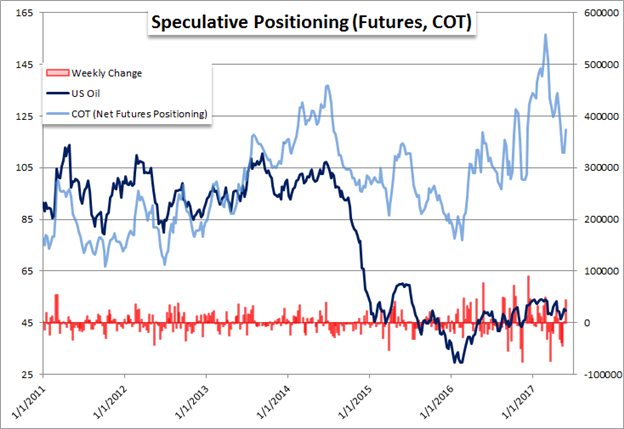 Volatility has shifted from measure in underlying markets to an actively traded market. Net open interest on all VIX futures market contracts have dropped back from a record net short this past week. It is still extreme n on the bears’ side. Net exposure to the asset has hit a fresh high on its own. It will be difficult to motivate an anti volatility trade however given the already fully deflated state of the VIX and other proxy measures. 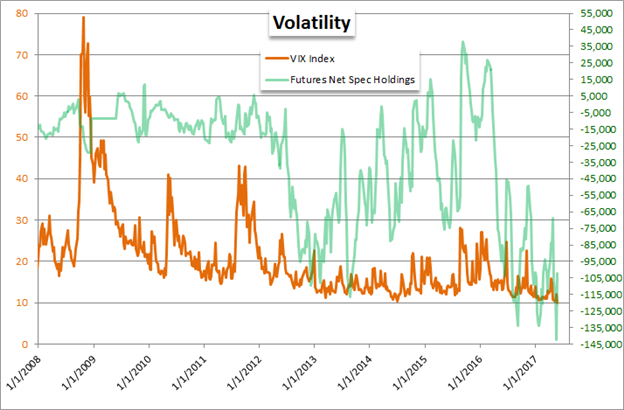 In the graph below, we see the weekly changes in net exposure quiet explicitly, but it is also a remarkable inactivity from the underlying indies. In another few weeks, the net short-appetite among VIX traders took a significant divots in market performance. Keep an eye on this speculative anomoly. 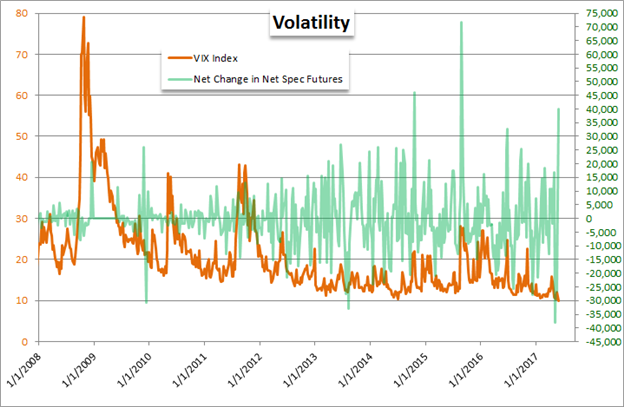