Oil and Bitcoin Tumble, SPX and VIX Keep Steady for 'Risk On'

Retail FX trader positioning on EUR/USD is starting to retreat from its extreme net short position while the dive in oil prices has led to relatively little adjustment from traders. How are traders positioned in your favorite assets? Visit the DailyFX Sentiment page to find out.

Complacency remains a hallmark of the global financial system. Yet, what are we to make of this lack of commitment when we see steady extension of risk exposure through benchmarks like the S&P 500 and VIX volatility index on the one hand. While on the other, we witness extreme volatility from crude oil and Bitcoin. It is clear that there are unique developments charging the volatility of these substantial moves, but how resilient are other markets to similar jolts of headline or thematic pressure? From the US equity indices this past session, we saw much the same mentality that has dominated over the past few months: a measured but steady build up of risk exposure. The S&P 500 managed to clear its multi-week range on a sixth-day advance and subsequently close at a fresh record high. The speculative charge for follow through that normally follows a break from range remains conspicuously absent. Further, the foundation for a 'risk' based move hasn't gained serious traction. European equities, carry trades and high-yield assets showed little of the same enthusiasm. For those wanting to take advantage on bullish technical moves for risk-oriented assets, it is better to keep targets, time and exposure down to reasonable levels.

On the docket, the fundamental event risk looking to combat the seasonal lull included a few important summits. Far more important than the market reaction accounts for, the NATO leaders meeting reminds us that protectionism is still a growing threat to global growth and possible capital flow. The previously unshakable defense collective of countries is under pressure from the US and other forces that are balking at the costs and uneven contributions of its members in an increasingly competitive (economically) world. If safety is compromised by these strained relationships, investors will grow increasingly more cautious about their exposure and question their already-exceptional risk load even more intensely. For sheer market impact, the OPEC meeting proved the more profound event - though not in the way the standard fundamental playbook would suggest. The gathering of OPEC and important non-OPEC producers resulted in a nine-month extension to cuts. Despite the supply constraint, crude tumbled on the day. This reminds us that traditional fundamentals (and technicals) are less important than general market conditions for influence nowadays.

As remarkable as oil's dive was Thursday, it wasn't the most attention-grabbing move. That distinction would go to Bitcoin. The cryptocurrency has been flying to record high after record high this week. The first half of the session opened the same way with an aggressive rally that seemed as if it would close out a ninth consecutive advance. However, the market hit an intraday barrier just below 2,800. The alternative asset flipped quickly and in three hours had lost 14 percent of its value from the intraday record high. This market reminds us the importance of monitoring market composition - or the weighting of participants. In the mixture of speculator, institutional interest and more; we discover motivation and trading style. Looking ahead to the final session of the week, we should keep a weathered eye out for bouts of volatility. Yet, with an extended holiday weekend in the US, it will be difficult to raise the dead (volatility) in the main stream markets. If anything could motivate such a sudden change in the markets though, a breakdown in relationships among the G7 would certainly qualify. We look at what markets are moving and which aren't in today's Trading Video. 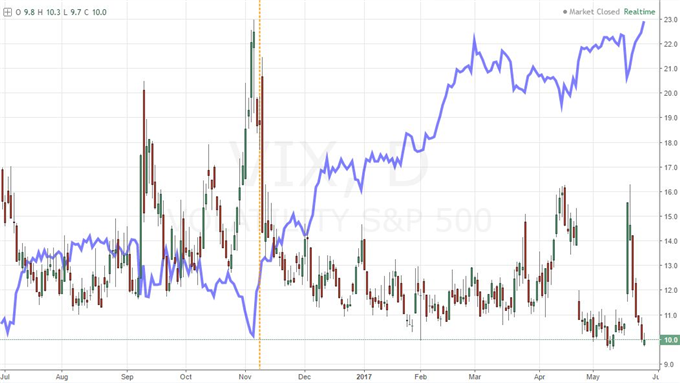 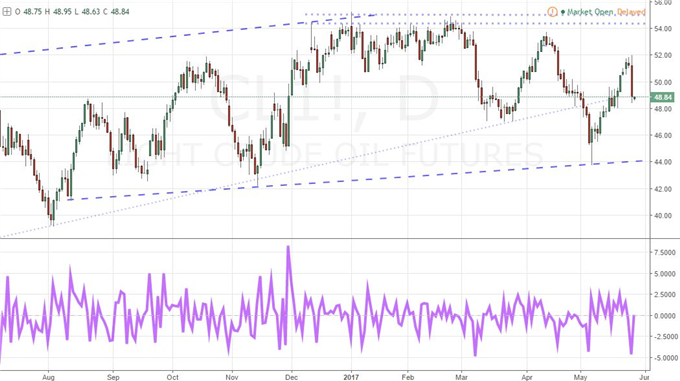