S&P 500 Slows Near Record, Dollar Bounce Before FOMC and NATO

With the S&P 500 reaching a record high and the Dollar on the painful end of a significant decline, how are retail traders positioned in these key markets? See the IG positioning statistics on the DailyFX sentiment page.

The big-ticket event risk of the week is approaching, and we can see the previously carefree market starting to rein in its optimism in preparation. Sentiment leader S&P 500 squeezed out its fourth consecutive advance, but its pace conspicuously maintained its serial deceleration. Now, so close to record highs, we again find the market in a more [XX introspective XX] mood. That is not a coincidence. The markets are making the comfortable swings in established technical and sentiment ranges but cut out before conviction is put to the test. Taking a definitive stance on speculative belief and exposure is being saved for a genuine change in conditions. The question - as always - is what will push us to that state?

In the past session, the data received a bump in importance, but it wouldn't hit the scale necessary to return trend. In fact, the past week's best performer, the Euro, finally tempered its pace Tuesday. The worst performer amongst the majors, the shared currency showed little genuine response to the fundamentally-conflicting news that European PMIs (a good and timely proxy for the quarterly GDP readings) had picked up and EU officials had failed to come to an agreement with the IMF and Greece on the country's next round of financial support. A slip from the Euro was a welcome relief from the bullied Dollar. The reprieve from the Greenback's most liquid counterpart had just as much influence on lifting the currency as its own fundamental laundry list for the day. The US PMIs were genuinely robust; but the collection of a drop in new home sales, tepid Fed speak and proposed budget of sharp government spending drop offered limited genuine enthusiasm for the currency.

Looking forward, the fundamental gravity will increase. That will interrupt the natural swings developing from the likes of the Kiwi - the past sessions best performer. Though risk trends were reserved, strong data was nonexistent in New Zealand and the currency's carry appeal had little reason to rise; NZD outpaced all of its major counterparts. NZD/USD, NZD/JPY and EUR/NZD will likely tune back into the big picture themes ahead - as will the US equity indexes, the Dollar and Euro. Top event risk in the coming session includes standards like the FOMC minutes, speeches from ECB and BoJ leaders (Draghi and Kuroda) and the Bank of Canada rate decision. While monetary policy - competitive and cumulative - is a theme that will wax back to prominence in the future; it is not the primary concern in these otherwise distracted markets. The key focus is the move to protectionism and competitive international relationships. On that front, the US President's meetings will hit serious economic prominence Wednesday with the first day of the two-day NATO gathering which will be followed by the G7 leaders meeting. We look at the potential and limitations of the big movers and key themes in today's Trading Video. 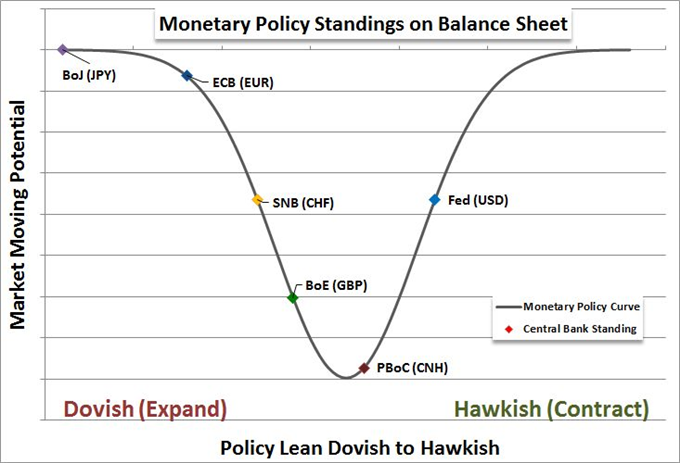