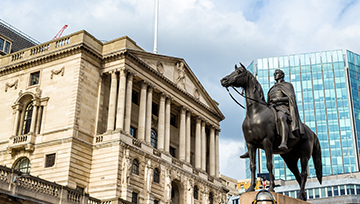 GBP/NZD The Cross Roads of BoE and RBNZ, Dollar Faces Wave of Data

See how retail traders are changing their positions on the Dollar-based majors ahead of the Friday round of US event risk and amid talk of QE change on the DailyFX Sentiment page.

The Pound and New Zealand Dollar crosses were producing considerable heat this past session in response to their respective central bank decisions. Both groups would manage to disappoint the market sufficiently that the two currencies suffered noteworthy losses. That is particularly remarkable given that the forecasts for both were set to neutral forecasts and that is what these groups would generally provide. Of the two meetings, the Bank of England's rate decision was the highest profile event on tap. There was no change to the benchmark rate or path of stimulus expected from the market, and the central bank didn't surprise. However, traders went in fully expecting nuance in the form of the Quarterly Inflation report. Governor Carney took pains to 'warn' that a hike could happen before the end of 2019 and perhaps even before Brexit was complete, but clearly the market was expected more.

From the Sterling, the reaction to the changing sentiment was restrained but clear. GBP/USD was turned off its gradual bullish course and threatens an equally-measured correction. Conviction however now falls on the motivation of the measured development in proper Brexit pricing and the progressive normalizing of US monetary policy. Far more technically appealing and simplifying the fundamental drive is GBP/JPY. The timing of the rate decision happened to align to a prominent double top at 148. What unfolds from here will likely follow risks trends. From the Reserve Bank of New Zealand, the familiar restraint and mild dovish lean wouldn't present any change to the script; but the market did not welcome the news that an explicit carry currency would not see its rate rise for the foreseeable future. The abrumpt drop from the Kiwi drove NZD/USD to key support around 0.6840. Where AUD/NZD and NZD/CAD help to refine the focus to the particulars of the New Zealand currency, GBP/NZD's confict will make interesting work of its recent, volatile range.

Looking ahead to the final trading session of the week, the docket will fill out; but that does not ensure volatility much less trend. The Hong Kong and German 1Q GDP figures are important proxies for two of the world's largest collective economies: China and the Eurozone. For sheer volume, no other currency comes close to matching the charge for the Dollar. The retail sales and consumer inflation (CPI) figures are headline worthy and can even tease rate speculation. Yet, it will be difficult to truly scale up. The University of Michigan's consumer sentiment survey carries far more weight. Conviction can readily turn into economic and financial reality. What may ultimate turn the Greenback to a trend though may very well be the unassuming Fed speak to close out the period. We have seen a concerted effort this week by certainly Fed members to draw attention to the balance sheet. The more traction this interest draws, the more likely we see risk trends take note of the change. We discuss what is developing in the market and where the best opportunities may arise in today's Trading Video.