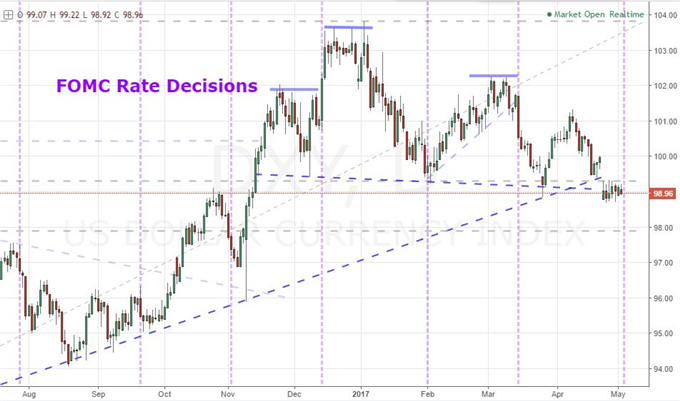 Video: Traders Look to FOMC Not for Hikes but Technical Breaks

Sign up for the live FOMC webinar scheduled to start 15 minutes before the announcement on the DailyFX Webinar Calendar.

European and Chinese liquidity filled out this past session, but that did little to provide a clear bearing in conviction for congestion stricken markets. However, the upcoming FOMC rate decision offers a more discreet event risk to potentially draw a definitive reaction from reticent speculators. There is little doubt that the upcoming Fed policy decision is this week's - much less Wednesday's - top event risk. Its potential is considerable, but the probability of a dramatic development from this policy group is low. We would be wise to remember this when setting out expectations for trade opportunities. The Fed hiked rates as recently as their last gathering (March 15th) which brings its tightening regime to three quarter-percent increases in the span of 15 months. That is a remarkable contrast to the global average and reason to assign it significant weight. However, market response to a nuanced shift in future rate speculation is more likely the speed of this event rather than the shock of a surprise hike.

With the market pricing in a very modest 5 percent chance of a hike at this policy gathering and given the central bank's penchant to avoid surprise, the fundamental impact from this decision will be from speculating time tables for the next hike and the aggregate increase through 2017. From that relative nuance, the Dollar Index can readily clear the remarkably tight range it has held since the technically-evocative gap lower to clear heavy support last Monday following the outcome of the first round French election. Yet, follow through will be difficult to manage without a significant shift in perceived tone or bearing. Looking at the anticipation of fireworks implied in volatility measures, we have seen little if any anticipation of significant activity since the pressure release after the European election. That does set us up for a more significant reaction to a Fed surprise, but such unexpected outcomes are rare from this group. Therefore, pick your Dollar positions wisely. EUR/USD is appealing to me as it comes with measured levels if we manage to clear the tightest technical boundaries.

While there is considerable attention being paid to the Fed decision - so much so that it likely cut short more significant developments in the Euro, Pound and other assets this past session - we shouldn't lose sight of the other fundamental event risk and themes developing in the background. An ECB member this past session remarked that discussion of a QE wind down plan should start next month and the French Presidential debates are due shortly after the FOMC decision. Brexit tension is quickly rising again which is concerning given the Pound's slow response to the pressure. Meanwhile, USD/CAD's run higher has coincided with an eventual break of a long-term channel support on Oil. Here too, the question of conviction comes into immediate review. We discuss the promise and false allure of the high profile fundamental events ahead in today's Trading Video. 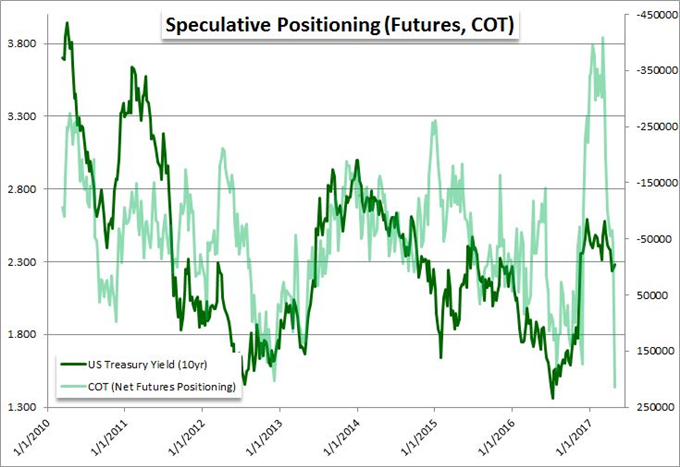 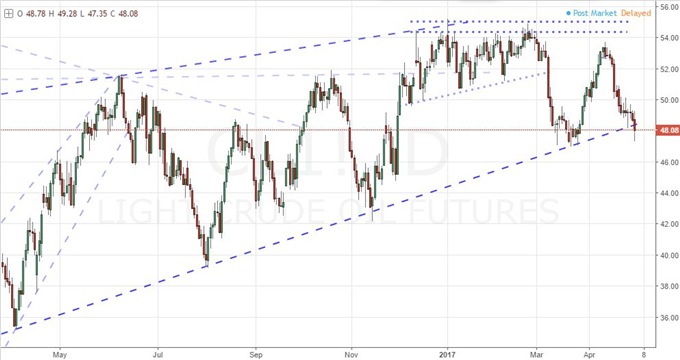