Will FOMC and NFPs Success with Dollar, Equities Where US GDP Failed?

• Where risk managed to squeeze a little more juice out of this past Monday's gap higher, the Dollar stalled in place

• Top event risk is US-centric between the FOMC decision, NFPs and government funding; but there is much more to trade

Sign up for the live FOMC, RBA and Eurozone GDP release coverage and see what other live coverage is scheduled to cover key event risk for the FX and capital markets on the DailyFX Webinar Calendar.

Despite a number of strong fundamental pot-shots this past week, the financial system's most prominent candle-bearers - the S&P 500 equity index and US Dollar - closed the period out with the pressure of obvious and defiant ranges. It is unlikely that these complacency-laden patterns survive another week amid general anxiety and another wave of key event risk. For traders, the focus should be on what ultimately shakes us from our collective speculative daydream. The spark can determine the level of volatility, the degree of follow through and breadth of capital redistribution. While the appeal will be a breakout and trend befitting the depths of complacency that has held us stationary, desire should not replace practicality. As always, the period ahead should be evaluated for the trades it can reasonably provide.

Top event risk over the coming week centers on the US Dollar. There are three events/data that will directly influence US monetary policy: Monday's PCE deflator; Wednesday's FOMC rate decision and Friday's April NFPs. These are all individually worthy of volatility, but the deeper influence they can exert over the United States' unique venture into policy tightening is where the potential truly rests. That said, the central bank rate decision is the end game of this line of speculation, meaning its anticipation will curb the inflation report's reach before the headlines start and undermine the speculative amplitude of the labor report after its announcement. Probability of a change in policy at the May meeting is low from the market's and economists' views, but that won't dampen interest in speculating the time frame for the next move later on. The probability of a June hike stands just below 70 percent according to Fed Fund futures.

Where there will be a fundamental focus in US monetary policy ahead, we should not discount the volatility potential for the various event risk on tap or the chances that a deeper trend can arise from more systemic sources. For the Euro, the outlook for the second round of the French Presidential Election will likely dampen the response to the Eurozone GDP release. A similar reticence will be present for the Pound unless given a pass or push from Brexit developments. Perhaps less burdened by external factors will be the Australian Dollar. The RBA rate decision is unlikely to end with a significant change, but its potential influence is substantial. As we keep track of the fundamental meteors that pass just outside our orbit, remember the position that the market's maintain. The US benchmark equity indexes are solidifying range resistance at record highs while the VIX has quickly bottomed out after risk flush last Monday on the open. With this mix of high-profile event risk and burden of complacency; key markets to keep an eye on include: EUR/USD, GBP/USD, Yen crosses, volatility measures and equities among other players. We discuss the market's ability to generate moves in the week ahead in this weekend Trading Video. 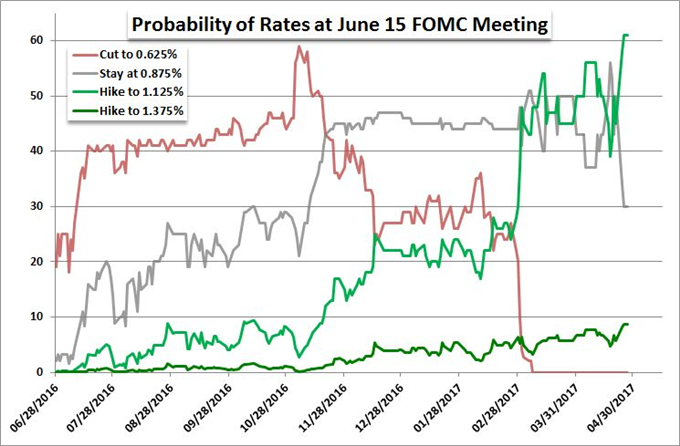 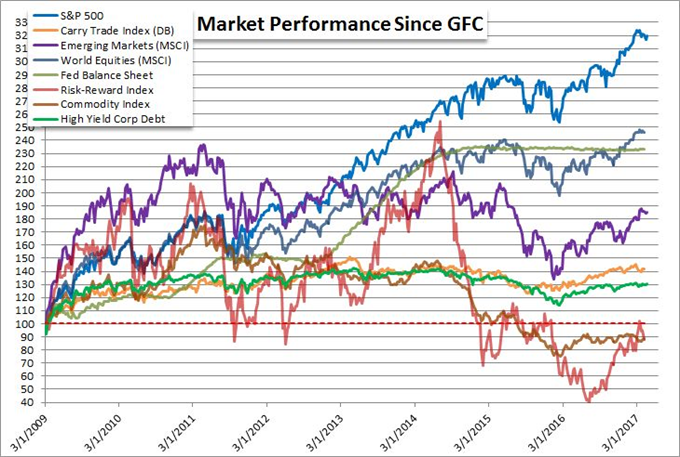