EUR/USD Faces Heavy Winds, Risk and Pound Moves Give Way to What’s Ahead

Surprise volatility is giving way to heightened anticipation. The remarkable moves we saw arises in the Pound, Euro and volatility this week have all been checked. The charge from GBP/USD and other Pound crosses on news that UK Prime Minister Theresa May had called a snap election has stalled with the Cable struggle in a zone of resistance around 1.2800 while EUR/GBP has helped its ground at 0.8300 support. Meanwhile, the Euro's surprising rally - clearing a EUR/USD wedge - has bowed to the weekend threat of close French election. For VIX and other risk metrics, anticipation keeps readings buoyant; but it disengages the steady climb higher until something substantial breaks.

Event risk through the final 24 hours of this trading week come with certain limitations. While there is a comprehensive proxy for global GDP in the wide PMI figures, the market is not particularly tuned in to the implications for speculative exposure. Japanese, Euro-area and US manufacturing activity reports for April are on tap; but developing a trend on any one of these releases - much less a trend - is highly unlikely. If anything, this data will simply feed into the suspense surrounding next week's official first quarter GDP figures are due for the United States, United Kingdom and France among others. Updates on Japanese trade, the New York Fed's GDP forecast and Canadian CPI simply can't override the forward looking vision in the market.

The most immediate event risk to keep traders on edge is this weekend's first round election in France. Given the wildly contrasting views of the candidates and the remarkable balance in the opinion polls, the risks are clear. Should the Euro find itself caught up in a sizable move, its place in the liquidity scales will no doubt result in strong responses from the Dollar, Yen, Pound and other currencies and speculative benchmarks. Outside the reach of overwhelming event risk, the Canadian Dollar is due inflation data that is good for volatility in the event of a substantial surprise. Pairs like the GBP/CAD, USD/CAD and other crosswind-heavy pairs should ignored while AUD/CAD and NZD/CAD don't present too many complications. Meanwhile, the commodity market has produced its reversals and burned through gas-laden wicks. Gold has retreated from its five-and-a-half year trendline resistance and oil has dropped through a hefty section of its broad range. We look at what opportunities are active, which are better to wait for and what's best to avoid in today's Trading Video. 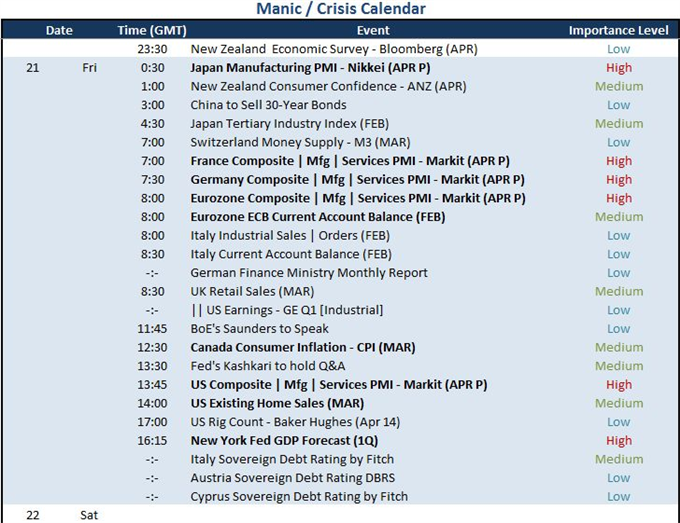 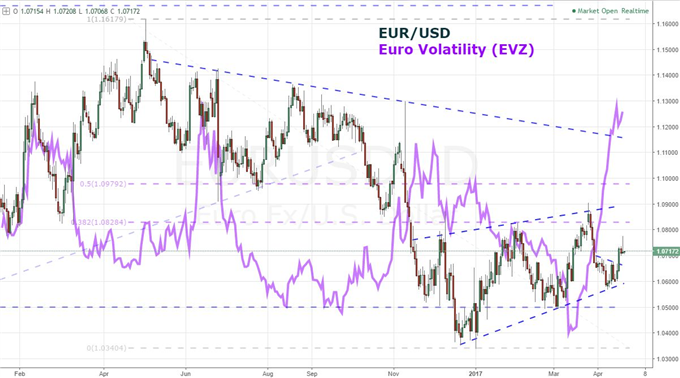