Dollar, Equities, AUD/JPY - Where Are the Options More Promising?

See how retail traders are positioning in AUD/USD, AUD/JPY, S&P 500 and other key instruments using the DailyFX SSI readings on the sentiment page.

Momentum behind risk trends seems to have fallen into full entropy - at least for this most recent phase of recovery. The S&P 500 was joined by other speculative-oriented benchmarks such as global equity indexes, emerging market and even Yen crosses with a uniform drift. The depth of complacency was put to the test amid data that data that included a bigger than expected drop in the US trade deficit and President Trump's resurrection of the $1 trillion infrastructure spending program chatter - though details were still absent. Meanwhile, the Dollar showed even less enthusiasm despite the US-centric headlines. Adding to this mix the shocking news that Richmond Fed President Jeffrey Lacker had announced his immediate resignation due to his part in the 2012 information leak scandal, it is further remarkable that the Greenback couldn't catch a spark.

Beyond the scandalous headlines, there is a real reminder that the FOMC is influx against a very aggressive political backdrop. While the district bank will vote in its own replacement in early 2018 (the vice president will stand in for the interim), there are two Board of Governor seats - with a permanent vote right - that are vacant. And those positions are to be appointed by the President. Restraint, skepticism and range remain the default for the markets. Therefore, it shouldn't really surprise that the combination of an in-line RBA rate decision and better-than-expected Aussie trade balance report didn't muster a net recovery for the commodity currency. In fact, both the AUD/USD and AUD/JPY took out near-term support to fuel the temptation for breaks with follow through implication. Yet, if that is not the broader pace of the market, these are bright lights that may prove bad for our health.

Looking out over the next 48 hours, we will wade into deeper fundamental waters. The surface event risk is still there. A global round of service-sector activity readings (PMIs) is due. For the US Dollar specifically, the FOMC minutes will offer another nudge to rate speculation while the ADP private payrolls will build up the appetite to Friday's NFPs. A more ambiguous course in the NATO meeting following regular threats by the US President to withdrawal or renegotiate the mutual defense agreement may offer a stronger charge. As we keep tabs on the natural escalation of scheduled event risk, it's important to maintain an understanding of the proper opportunities for the markets we are dealing with. Range versus breakout for a market like gold facing down a triple top is common. The choice should follow probability until those realities change. We discuss trading with an unproductive market topography in today's Trading Video. 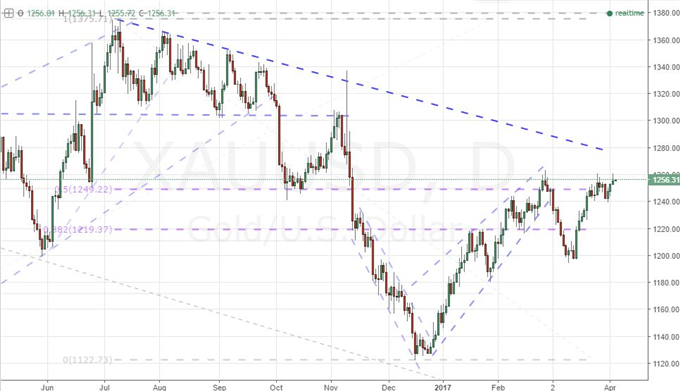