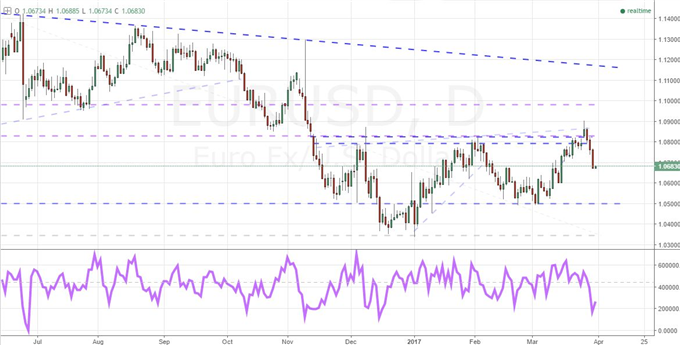 EUR/USD Ready for Another Fundamental Push Amid Sharp Decline

The hope of a systemic move from risk trends this week was dashed shortly after Monday's technically-charged gap down by the S&P 500 and other major indexes. Equities, Yen crosses, emerging markets and other risk-led assets have slowly drifted higher as the week progressed. And, while we have found some fundamental motivation along the way - such as the Transport Secretary's loose remarks that the $1 trillion infrastructure spending program would come sometime later this year and the strong surge in the Conference Board's sentiment survey - it has struggled for the specificity or scale necessary to further already buoyant expectations. Another round of notable event risk is scheduled through Friday's session, but it again falls short of critical mass. Unless something unforeseen hits the market from a more systemic level, critical breaks and/or trends are for next week or further out.

Yet, limitations on big-ticket moves doesn't mean a lack of volatility. The Trump administration weighed in on a frequent source of pain for the FX market this past session when it was said through a spokesperson that they were looking into penalties to impose upon those the government perceived to be manipulating their currencies. Whether that is China, Mexico or some other target of recent indignation; the ultimate outcome of a successful retaliation is the same: a lower Dollar. That said, the effectiveness of this agenda is certainly something to question. Scale, measurement and reciprocation are all difficult factors to account for. On the topic of Mexico, the country's central bank hikes its benchmark rate at a more reserved pace relative to previous moves (25 basis points); but that carries the perception of improvement. Confidence in growth, financial conditions and trade work to ease the policy authorities pace. Slower hikes may thereby fortify USD/MXN's break below 19. Another emerging market currency experiencing volatility via news was the South African rand's response to news that a cabinet shuffle had pushed out the Finance Minister. The USD/ZAR's long-term reversal after years-long bull trend and consolidation may be fully dashed.

For more reliable and liquid opportunity moving forward, the EUR/USD may continue to steal the spotlight. The benchmark pair's three day drop through Thursday was the sharpest slide over that stretch since mid-December. It is noteworthy that this decline has progressed despite some ECB language looking to turn back hawkish market views, a disappointing Germany CPI outcome and the President's seeming interest to pull the Dollar back. Friday's event risk will represent another opportunity to amplify or curtail the EUR/USD's move. The preferred inflation figures for the ECB (Eurozone CPI) and Fed (PCE deflator) are due for release. With the market tentatively projecting a slow turn away from the ECB's extreme dovish position and the market still stretched beyond the FOMC's official forecast for 2017 hikes, there is traction to be found. We discuss what markets are moving and which are facing restraint in today's Trading Video. 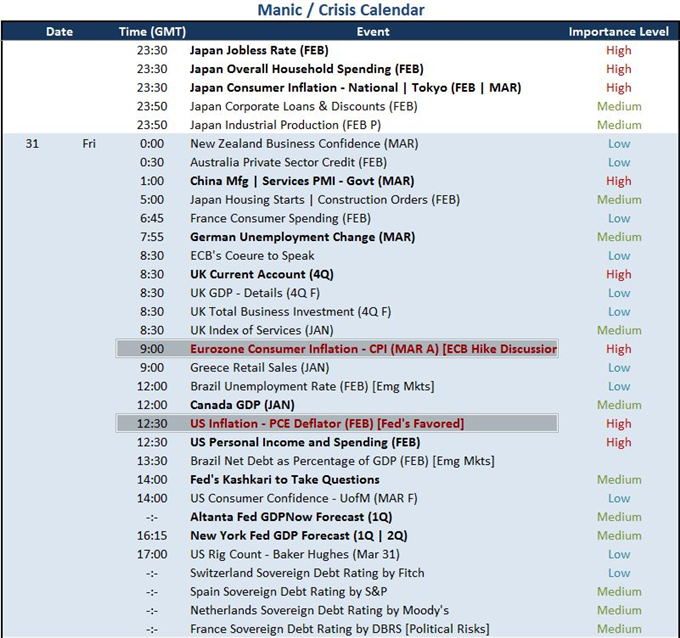