We have been anticipating this very moment for nearly nine months now - the official start of the Brexit proceedings. Despite the full expectation by the masses, there was still remarkable speculation that a substantial move would be realized by the Pound. Yet, as would be expected by the realization of something that was fully priced in, the response from the market was tepid. GBP/USD's range reversal from earlier in the week stalled. GBP/JPY's tight range remained undetonated. And, the commodity-based Sterling crosses (GBP/AUD, GBP/CAD, GBP/NZD) all found their gradual, bullish reversals waylaid. This doesn't mean that the Pound will no longer take its cues from this slow-burn event in the future. Now the focus is on the negotiations and rhetoric that will guide it from both sides of the table. A clean and clear move however will be difficult to motivate.

Taking up less headline space, both the S&P 500 ('risk' asset guide) and Dollar further drained hope that critical breaks would find a second wind and full traction for long-awaited trends. A government official (US Transportation Secretary) remarking the the President would introduce the long-awaited $1 trillion infrastructure spending bill later this year did little to recharge the same level of speculative anticipation seen over the past four months. Another round of moderately hawkish Fed speak would fare equally well with the steadying Dollar. On the charts, the immediacy of the equity index's reversal all but disappeared. With EUR/USD, the Dollar's slow rebound moved right back through the former 'neckline' which technical traders would have preferred held as former resistance / new support around 1.0800/25.

EUR/USD moving forward still holds considerable potential. While the technical appeal may have been sapped somewhat for bulls and bears after the technical break, there is event risk ahead that could provide genuine motivation rather than hollow speculative hope. While there is data on both dockets Thursday, it is Friday's event risk that can drive to the core of what has directed the pair's movement these past months and years. The Eurozone CPI and US PCE deflator are inflation reports that amplify or cancel hawkish views behind both the ECB and Fed (the former's ambitions much earlier than the latter). A thorough read of the docket ahead offers a lot of event risk with varying degree of promise under proper conditions. In other markets, the confused risk view seems to dampen hope for bigger moves, yet oil's rebound seems to suit the broader market pace. We discuss key moves and building pressure in the market with today's Trading Video. 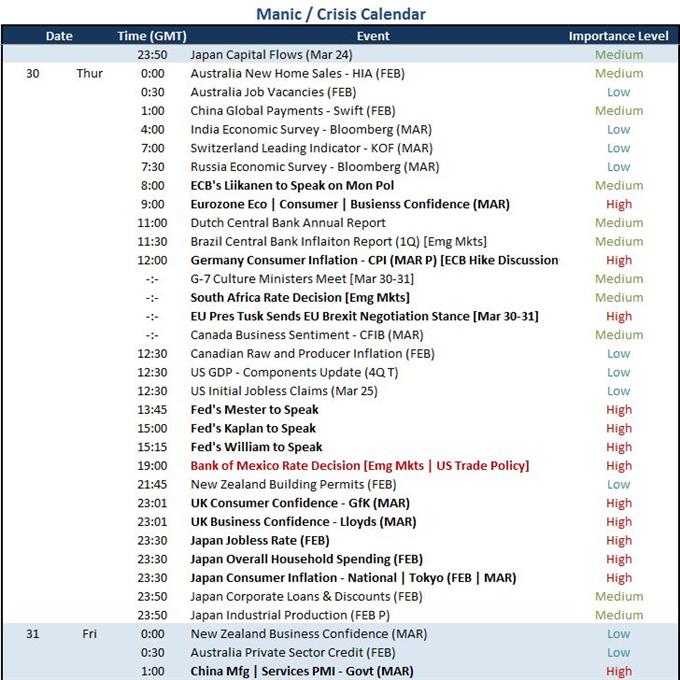