Sign up for the live FOMC coverage and see what other live coverage is scheduled to cover key event risk for the FX and capital markets on the DailyFX Webinar Calendar.

Traders are distracted. While there are remarkable technical patterns taking shape across the markets and noteworthy event risk - like the progress on Brexit - filtering through the docket, it is difficult to escape the pull of Wednesday's FOMC decision. The central bank's policy deliberations will move more than just US equities, the Dollar and Treasuries. Given the scale of the leverage behind the US financial system and the banner of change the Fed carries before its global counterparts, it comes as no surprise that traders in all corners of the market are measuring their exposure. Closest to home, the Greenback's response faces heavy bias. The certainty of a 25 basis point rate hike and growing speculation of three, four and even five total hikes for the year reflect a high bar to impress the already aggressive bulls.

For broader risk implications from this fundamental juggernaut, the scenarios are complicated by complacency. How complete and deep is investors' apathy to creeping systemic change? A steady increase in rates in the world's largest economy carries implications for local GDP, inflation, baseline rates of return, foreign loan repayment and much more. As with the Dollar itself, the broader markets have already accounted for the inevitability of a faster pace of policy normalization, but there is far more at risk in these lethargic areas of the market. A rate hike at this meeting will do little to shake the foundations of complacency, but the forecasts and motivations behind them can cultivate a slip in conviction that has become increasingly apparent. While the impact may radiate as far as the 'risk' orbit, trades should still be kept to reasonable scale in terms of objective, duration and size. The same is certainly true of Dollar pairs. However, the recent (restrained) run for the Greenback better positions bearish corrections as with the ranges on GBP/USD, USD/CAD, USD/JPY and NZD/USD.

While traders' attention will be disproportionately afforded to the Fed's policy decision, there is plenty of high profile event risk to consider for underlying trends or even jolts of volatility. This past session extended oil's slide on news that Saudi Arabia had increased its output month-over-month (though still within its OPEC limit) while the Pound struggled with conflicting news of UK Prime Minister Theresa May receiving the greenlight to pursue the formal Brexit proceedings and Scotland's First Minister Nicola Sturgeon announcing the country may be heading towards a second referendum vote in 2018. Ahead, the Netherlands's election will draw the focus back on the Euro's long-term viability, the UK jobs figures will offer economic charge, US consumer inflation speaks to ramification of policy, and attention will turn forward again - with another wave of events like the BoJ rate decision on tap. We discuss the rough terrain ahead in today's Trading Video. 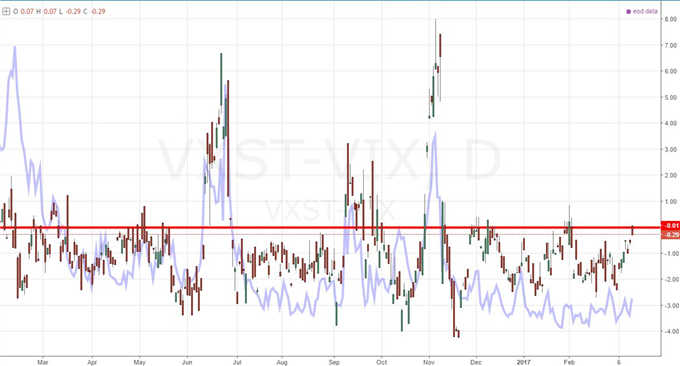