US Equities Explode Higher After Trump Address But Dollar Lags

See how retail traders are positioning global equity index CFDs and the Dollar-based pairs using the DailyFX SSI readings on the sentiment page.

The Dow Jones Industrial Average may have broken off its record pace of consecutive daily advances Tuesday, but President Trump ensured speculative appetites were whetted the subsequent session. US equities flew on yesterday's open to tip a new range of records. The S&P 500 and other US equity indexes charged to record highs. The singular index would also post its biggest bullish gap in eight years and extend the count of days without one percent or greater daily loss to 96 - the longest period of calm in 20 years. What was it that encouraged this surge in confidence in the President's address to the joint session of Congress? Vows of tax reform were repeated and the call for a $1 trillion fiscal stimulus was revived after a long hiatus. Neither was addressed with important details or clear time frames; but in a market of lemming-like complacency, that is enough.

Surveying the impact further from the epicenter of the US policy influence, risk appetite was certainly warmed but hardly enjoying the same degree of enthusiasm. European shares had the convenience of crossover sessions that offered proxy speculative appetite though their highs and momentum were materially more restrained. Asian markets wouldn't move without a clear bearing from US investors, but similar - restrained - benefit is expected. US Treasuries responded with a dramatic tumble (yield surge) but high yield debt found limited engagement. Showing much of the America-first curbs touted in policy commitments, emerging markets showed a much more restrained version of the risk appetite rise. Interestingly enough, the FX market's best positioned currency for US improvement and arguably best yield play - the US Dollar - was remarkably hesitant with its advance.

Technical traders might say the Dollar (DXY Index) is being held up by the right shoulder on a large head-and-shoulders pattern, but the reality is that there is a serious fundamental disconnect. Risk trends are uneven, policy vows include questionable risks through boarder taxes (a threat to trade) and even a rising monetary policy advantage seem to carry diminishing weight amongst investors. According to Fed Funds futures, the chance of a March 15 rate hike has soared to 80 percent. What is an extreme jump is expectations in two days. While we have seen more aggressive Fed speak and some encouraging data (the PCE deflator), the true turning point was the passing of a high profile event risk. Perhaps this obliviousness will lift when Chairwoman Yellen and Vice Chair Fischer speak Friday. In the meantime, a wide range of event risk has been overshadowed by the anticipation centered on the US policy update. Euro-area and UK PMIs; US consumption figures; Bank of Canada rate decision; Australian 4Q GDP and more received barely a bat of the eye. Perhaps the event risk ahead will carry more authority. We discuss the remarkably strong and restrained moves in today's Trading Video. 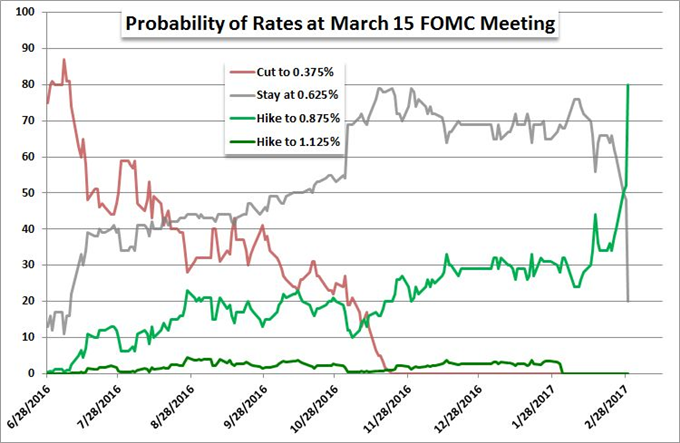 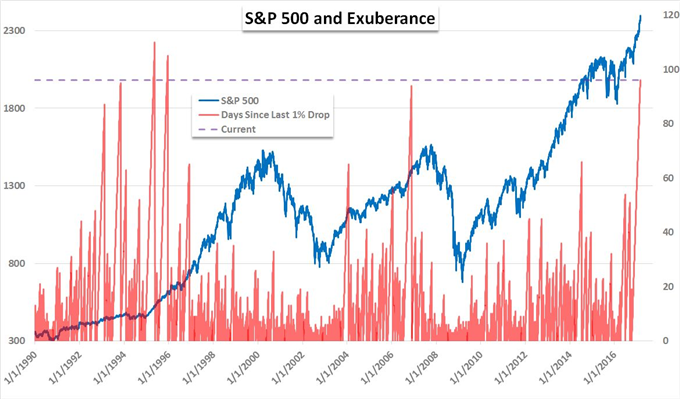