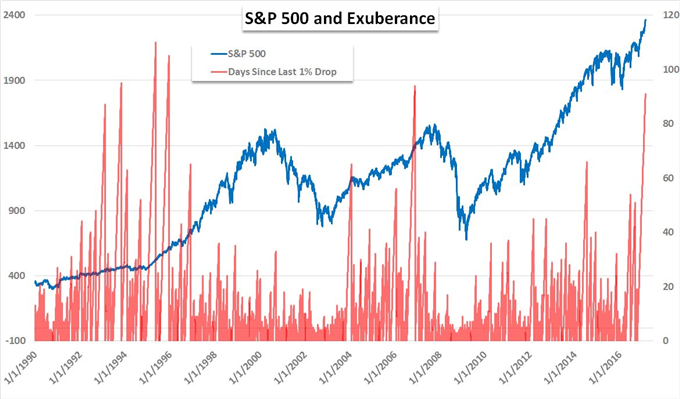 This week's most impressive opening move was made by risk assets. Yet, this swell in speculative appetite didn't carry its momentum through the past session. From the S&P 500 and other benchmark US equity indexes, the day offered consolidation rather than progress. Meanwhile, global stock markets were still a mixed bag, higher risk assets like the Emerging Market and High Yield Fixed Income ETFs crawled higher and Yen crosses presented no tail wind at all. The extreme quiet in the market - it has been 91 trading days since the SPX has seen a day's decline of one percent or greater - retains a sense of uncertainty and bare contrarian fear that will eventually have to be reconciled.

On paper, the FOMC minutes could have proven a significant motivator for speculative appetites. The gap between market entry price and the existing risk-reward has been held up by an unprecedented infusions of monetary policy support from the world's largest central banks. A break in that effort can let in an uncomfortable rush of reality. Yet, speculative appetites were unmoved by the Fed's tangibly more hawkish view of policy. According to the transcript, "many" officials expected a hike "fairly soon" so long as economic conditions hold their bearings. Perhaps the market is heartened by the potential for higher yield moving forward. Yet, that wouldn't explain the Dollar's stumble after the Fed weighed support for near-term hikes nor the suggestion that balance sheet wind down would be debated moving forward. What course is the Greenback running. That is an important question given the DXY Dollar Index's head-and-shoulders pattern and range of technical patterns on the majors.

Outside the top two themes on the FX radar, there were distinct fundamental developments for the Euro and Pound - though price action wouldn't seem to support their importance. A shift in French politics whereby Marcon and Bayrou join forces dampens the chances that anti-Euro candidate Le Pen steers France towards a dramatic exit. A more mundane UK 4Q GDP update showed an unexpected contribution to growth by exports despite Brexit, but you wouldn't tell from GBP/USD or GBP/JPY restraint. Ahead, the scheduled event risk offers little foothold for any overwhelming fundamental threats. In the stead of a key event, US politics, oil and Bitcoin should be monitored closely. We discuss what is developing in the markets and how to frame opportunities in today's Trading Video.