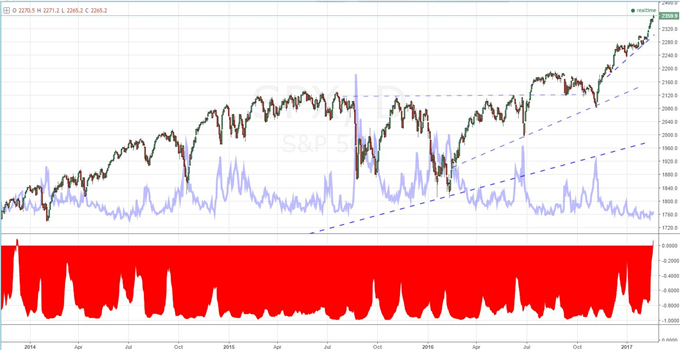 A Return of Liquidity Refreshes S&P 500, Dollar and Oil Bulls

The return of liquidity after the long, US holiday weekend charged US equities, the Greenback and oil bulls. For traders, the question is: which of these strong drives has the motivation to extend its run? The speculative drive championed by the S&P 500 is hands down the most impressive on a pure price basis. A gap higher to start the official US trading week supplied an unexpectedly intense pressure to fresh record highs. Their remains a distinct lack of fundamental backing to this move. There was none of the high profile data (US PMIs were actually weak) nor surprise business-friendly policy updates from the President that have supplied much of the motivation of late in Tuesday's session. Meanwhile, the speculative - versus investor - participation finds less and less low-hanging fruit appeal with the VIX and S&P 500 correlation (20 day rolling) notably flipping for the first time in three years.

While there is some noteworthy event risk and the ever lurking chance of a meaningful trade policy update ahead, that is remarkably thin support for already stretched speculative ambition. For global shares, emerging markets and high-yield fixed income - useful 'risk' assets in their own right - the day's performance was far less remarkable. The 'animal spirits' can take the wheel, but its steering often leads to trouble. In contrast, the US Dollar's rebound doesn't strike nearly the same speculative statement; but its motivation is just as dubious. The Fed speak this past session taps a theme that was explicitly ignored last week when far more prominent event risk was available. That also sets low expectations for the upcoming FOMC minutes. For oil, the jawboning effort was once again employed; but this time it seemed to catch traction. A surge to 55 was latter driven back. A true break (not necessarily bullish) seems inevitable but follow through certainly is not.

For the docket over the coming session, the high profile event risk is limited and the underlying themes are either stretched or cold. These are not conditions where the market seems primed to change its pace and bearings. Traders in shares, Greenback and crude should monitor markets with a weary eye. Meanwhile, the Euro and Pound contradictions present pressure without release. The former's slide despite encouraging PMI figures may signal a shift in focus to Greece and Euro-area stability, but that is unlikely. Despite remarks by Jean-Claude Juncker about the EU's tough negotiation approach to the UK's separation and the House of Lords passing its second reading without a vote, the Sterling was little moved. We discuss all of this and more in today's Trading Video.