Sign up for the live UK or US 4Q GDP coverage and see what other live coverage is scheduled to cover key event risk for the FX and capital markets on the DailyFX Webinar Calendar.

Opportunity was high for the Cable this past session with a convergence of UK and US event risk that could move the deep fundamental tides behind their respective currencies. The UK Constitutional Court's ruling on Parliament's say on Brexit could alter the expectations of a near 3,000 pip depreciation of the Sterling. As for the US budget forecast from the Congressional Budget Office (CBO), the new President's extraordinary policy proposals - which drove the Dollar and S&P 500 to rally after the election - could have been put against realistic measure. Neither event offered a decisive shift in views that could supply GBP/USD with the critical break that could have been.

For the CBO, a lack of detail on the incoming President's policies meant their influence was left out of the forecasts. Though the UK Court announced Parliament had a say in the UK's exit from the EU, the Sterling didn't respond to that the same kind of speculative retracement fervor that we had seen in the past with data-motivated QE increases and risk trends. More market moving was the Australian 4Q CPI figures. While its surprise quotient was far from extreme and monetary policy has proven less exceptional a fundamental theme of late; it was a clearer outcome with noteworthy technical progress from the likes of AUD/USD. Perhaps the upcoming New Zealand 4Q CPI update can afford the same for Kiwi crosses.

Shifting from economic-oriented theme and scheduled event risk, the market's most rudimentary motivations are once again flashing a warning signal. Risk trends have been pushed to extreme complacency and exposure. The S&P 500 resolved a narrow wedge with a bullish break to fresh record highs, but follow through was notably lacking. This stretched benchmark for all things designated 'risky' is well established in the speculative rank. Where the real concern should be placed is the market's lack of insurance to this stretched position. The VIX - the cost of hedge to protect against unfavorable moves in the underlying US equity market - moved back to its lowest close since July 2014. The short-term measures of implied volatility in the VXX extended its dive to record lows. Meanwhile, there was still evidence of market's buying cheaper 'disaster' insurance via the SKEW. Sentiment is already way out on a limb, and throwing off the safety lines doesn't improve circumstances. We look at where the markets are moving and where they are most pressurized in today's Trading Video. 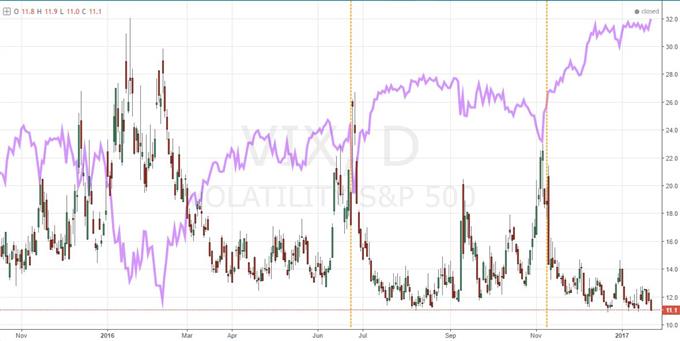