Sign up for the live FOMC rate decision coverage Wednesday and see what other live coverage is scheduled to cover key event risk for the FX and capital markets on the DailyFX Webinar Calendar.

Speculators are navigating close to the rocks and it isn't difficult to see that running at a high speed can spell serious problems. With the FOMC rate decision set Wednesday and expectations set very high, maintaining the pace of build up in risk assets like US shares or Dollar exposure further increases the possible fallout from a surprise while reducing the possible returns by merely meeting the inflated expectations. One of the most remarkable assumptions to draw from our current market bearings is the robustness of speculative appetite despite the anticipated rate hike from the world's largest central bank. While a lift to the benchmark can reflect an optimism in the economic and financial outlook, it doesn't offer an improvement in the speculative backdrop nor materially seed growth in this struggling global economy. Given the current bearings, it reads like an assumption that the Fed is set to answer all of the market needs. That is clearly unrealistic.

Despite the very stretched exposure on risk trends, the S&P 500 has not significantly slowed from its rapid climb. While the index has broken its six-day rally to record highs - the longest consecutive climb since June 2014 - we haven't seen speculators collapse under the sudden return of gravity. Meanwhile, global stock markets are still enjoying some degree of continuity from the preceding week's momentum while more unique asset classes (emerging markets, carry, high-yield fixed income) have also kept their buoyancy - if not absolute enthusiasm. Meanwhile, the Dollar riding on both yield divergence and risk reach did experience as sharp correction Monday. This has led to impressive technical setups for the likes of EUR/USD and USD/JPY. The former has checked from a two-year range low and put that run to parity back into the Fed's hands. The latter meanwhile is perhaps the most fundamentally indicative of the risk versus monetary policy theme conflict.

While the pull of Wednesday's top event risk is strong, it won't anchor all markets in place. One particularly dramatic move to start the new week were the gap higher from US oil prices. Not only was the jump higher exceptional, but it has triggered a very high profile technical pattern: a multi-year inverse head-and-shoulders pattern. With a move beyond 52, the market has technically 'broken the neckline'. Follow through on this provocative development will draw from broader risk and the Dollar's bearings. Yet, this sharp drive was the work of a supply-demand spark with major non-OPEC energy producers agreeing to join the oligarchy in their reductions to help rebalance the global glut. The docket ahead can cater to other themes that won't necessarily hitch their horse to the Fed like Brexit, China trade pressure and more; but few things will escape this fundamental black hole. We look at what's moving and what's positioning in today's Trading Video. 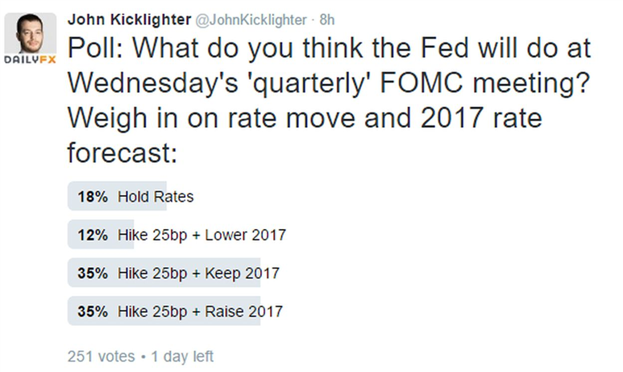