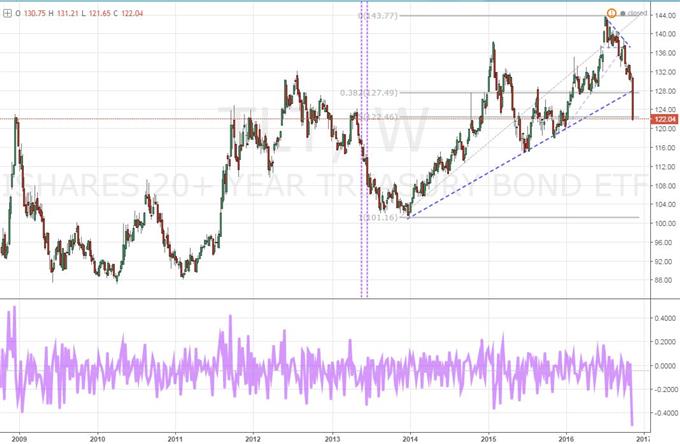 Given the United States' position as the world's largest economy and financial center, the performance of its markets frequently acts as a bellwether for global health. Yet, does that relationship hold in the midst of growing protectionism? We will see this critical link put to the test going forward as the major markets diverge. This past week, US markets clearly outperformed. The Dollar (ICE Index) posted its strongest rally in 12 months. Meanwhile, the S&P 500 went on to the strongest run in two years while the Dow Composite paced a near four-year climb. That presents a significant contrast to global shares, emerging market assets and recently en vogue high-yield/high-risk markets.

The charge in this disparate performance seems largely the work of the US Presidential election. President-elect Donald Trump ran on a platform of fiscal stimulus and renegotiated or cancelled trade deals among other unorthodox policy. The balance to local benefit to global detriment is unlikely to spell net 'risk appetite'. Treasuries offer additional insight into that fundamental imbalance. The traditional safe haven drops in a risk-seeking and growth environment; which makes for the biggest TLT (Treasury ETF) drop on record so remarkable. Yet, this market's aligned performance to other 'risk-on' assets speaks more to general risk aversion and the undermining of confidence in monetary policy than a permanent shift in sentiment.

In the week ahead, it is increasingly important to keep an overview of the big-picture fundamental themes amid the volatility and building divergence. Sentiment is seeing more pressure than relief. Should US assets stall and falter, it will lift the fog of questionable optimism. The deeper concerns though rest with Emerging Markets - especially Mexico and China. The former is seen as the most sensitive counterpart and the latter presents the greatest risk to global currents. Aside from that, monetary policy will be on display. The market's 84 percent probability of a Fed hike will be put to the test by inflation data, Fed speak, Chairwoman Yellen testimony - not to mention volatility. Meanwhile, the BoJ and SNB are finding their control continuously slipping away under active markets. Brexit, Aussie jobs and Euro-area stability are just a few more themes to find activity and trades from. We discuss all of these key themes and imminent drives in this weekend Trading Video.