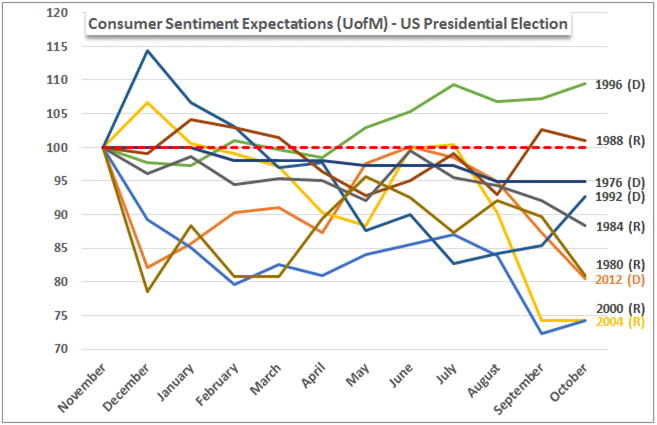 Unusual US Presidential Election Risk for Dollar and S&P 500

There is a lot of hype around the economic and financial disaster that can befall an economy if the wrong candidate is voted into office. However, these bombastic sentiments are rarely so influential down partisan lines as the campaign literature would have us believe. With the US Presidential election a little over a month away, we take a look at the impact the event has on the economy and markets on a historical basis. What quickly becomes apparent is that there is no uniform bullish or bearish / growth or contraction outcome according to what party is in the White House. That said, there are consistencies in the data that seem to follow the event itself.

Using consumer sentiment surveys and the ISM's PMI statistics for economy proxies, we can see that the initial reaction on the former is often dramatic with sharp moves towards optimism or pessimism after the first month. Thereafter, confidence typically stagnates and weakens as the months pass with the new Commander in Chief. From the manufacturing activity measure, we see a similar pattern of initial motivation with a slide in health more often than not 12 months after the elections are in the record books. From the markets, the tendencies are even more prominent. While the initial response is dramatic and can be dependent on campaign rhetoric; volatility measures fall and the S&P 500 rises over the subsequent weeks.

Where this election may differ is not in the candidates necessarily but rather the electorate. The split in party lines is severe with each group certain that if the other candidate wins, it could lead to a certain economic crisis. While this isn't particularly new; activity heading into the event is already tepid. Furthermore, market confidence bolstered by central bank excess has led many to fear an asset bubble that could be undermined by unforeseen risks. This is further fed by a global trend towards isolationism and anti-trade pressure that has led to developments like the UK's Brexit and general anti-EU sentiment among European members. We discuss how this event can prove a risk regardless of what candidate is elected in today's Strategy video. 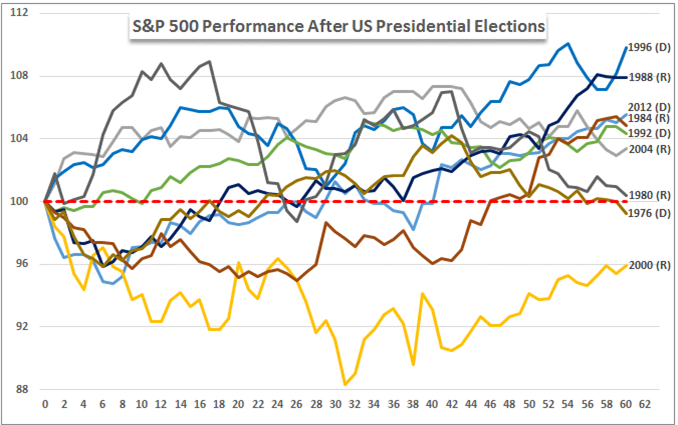