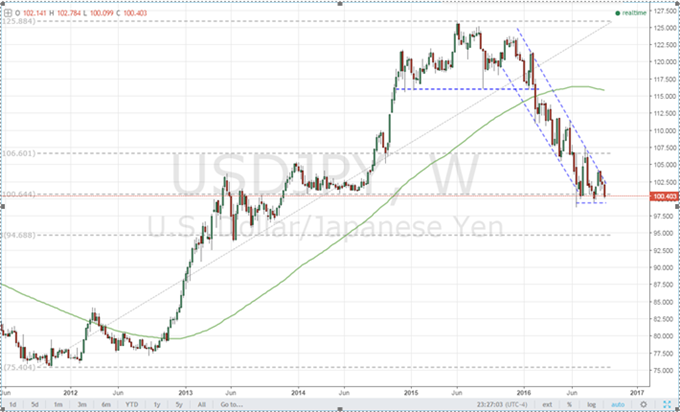 A Close Watch on USD/JPY, GBP/USD and SPX In Central Bank Afterglow

The central banks have run their show, and the markets have once again voted with skepticism. Another unorthodox move from the Bank of Japan (BoJ) sees a shift of focus to long-term rates and help to the banks with a clearer time frame. Stimulus will operate to keep the 10-year JGB rate at zero with yield curve protection until it is clear inflation is running safely above 2.0 percent. From the Fed, the decision to hold met the consensus forecast; but the promise of a hike in the near future was escalated as far as the central bank's balance and avoidance of pre-commitment would allow. The net result from an FX perspective: the Yen climbed and Dollar fell.

For the Japanese central bank, this seems like a white flag to say they will not fight the market's current. Rather, they are interested in keeping a firm anchor through unfavorable seas. There is potential for the Yen to extend gains on a rebound from a discount that was afforded by a front-run-the-BoJ view between 2012 and 2015. To truly motivate to serious breaks with follow through, the impetus shifts to risk trends - which have been undermined by the further fading confidence in monetary policy to maintain over-inflated speculative conditions. Concerted selling in risk assets (S&P 500, global shares, emerging market assets, high-yield, etc) that aligns to a USD/JPY (99), EUR/JPY (110) or AUD/JPY (76/72) would mark a convincing overview.

In the Dollar's case, a passive buoyancy will likely limit the Dollar's slide. Short-term range looks more appealing as the fundamentals that matter thin out and fits broader conditions. AUD/USD and USD/CAD are closer to technical boundaries, but they need to fit risk measures. GBP/USD is attractive even though it doesn't fit the bill of a rebound from its recent pullback - but passive range works both way. Ahead, key event risk will focus on that broad 'risk' assessment (constant vigilance should be paid to this theme), Brexit concerns and Euro-area health assessment with the first ESRB meeting. We talk about market conditions for near-term and longer-period setups in today's Trading Video.