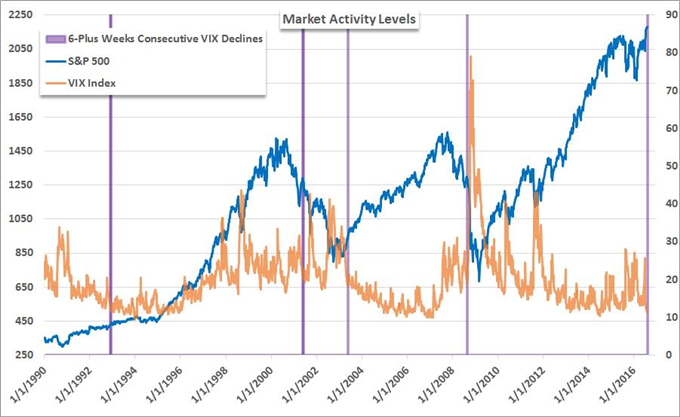 See the DailyFX Analysts' 3Q forecasts for the Dollar, Euro, Pound, Equities and Gold in the DailyFX Trading Guides page.

The S&P 500 closed out this past week at a fresh record high with other risk-sensitive assets basking in its lurid glow. Speculative positioning was offered another strong but temporary charge between a fresh wave of global stimulus and encouraging round of data to bolster US growth views. Yet, neither of these fundamental themes have provided lasting lift for the financial system recently. Where US payrolls takes the bite off the weak 2Q GDP figures, the world's largest economy still runs a moderate pace - which is still materially more stable than the perception of Europe, the UK, Japan and the Emerging Markets. Meanwhile, the half life of direct stimulus efforts by central banks on their own markets has dropped to less than a day. There may be more lift collectively, but likely not much more.

As we assess the kenetic energy from the most recent push, the conditions surrounding market exposure more readily lend themselves to skepticism. The S&P 500's last minute push to record highs came after an extended chop at extremes with little of the bullishness that fueled the remarkable move through the final week of June and opening weeks of July. Meanwhile volume and open interest (in Emini futures) flagged under a waning appetite to participate in the most recent push. For the increasingly popular VIX volatility index, a drop to two year lows added to the view of active complacency. Where the level of the 'fear' measure dropped, open interest surged to a record between a need for safety and an appetite for speculative opportunity where traditional assets no longer satiate.

The VIX dropped another 4 percent this past week to notch a sixth consecutive weekly decline. Such a persistent deflation in the volatility measure is an exceptionally uncommon event. Over the past few decades, there are only a handful of comparable situations, and the circumstances that followed were generally unfavorable for the bulls. As the saying goes, 'this time is different'. However, that doesn't mean the market will just keep flaunting its complacency without recourse. Exposure and leverage are greater now than nearly any other time in history, liquidity is growing dangerously thin, and the fundamental tab for maintaining the calm is unprecedented. The tide may be held back for now, but it will eventually overwhelm. We take a big picture look at the market in this weekend Strategy Video.