How would you like to make a successful investment, only to watch your profits diminish or even disappear on a technicality? Didn’t think so. It’s happened before, and you mustn’t forget that an investment in any foreign entity is also an investment in that nation’s currency. If the foreign currency loses value against your own currency, your returns could suffer when you convert them back into your own money.

To illustrate: “Joe” is a Canadian investor. In 2003, he invested in the S&P 500, an American equity index. Before sitting back to watch his stock grow, though, he converted his CAD into Greenbacks to make the investment.

The market boomed, and by 2008 the S&P was up 38%. But when Joe decided to take profit, he realized that his real earnings were nowhere near what they should have been. The reason? While Joe’s cash was sitting in US markets, the effects of the early 2000s bull market were not lost on the risk-correlated Canadian Dollar which more than offset his US equity profit. So strong were Canadian Dollar gains, in fact, that when he converted his 38% profit back into his native currency, he actually had 3% less cash than when he started out. 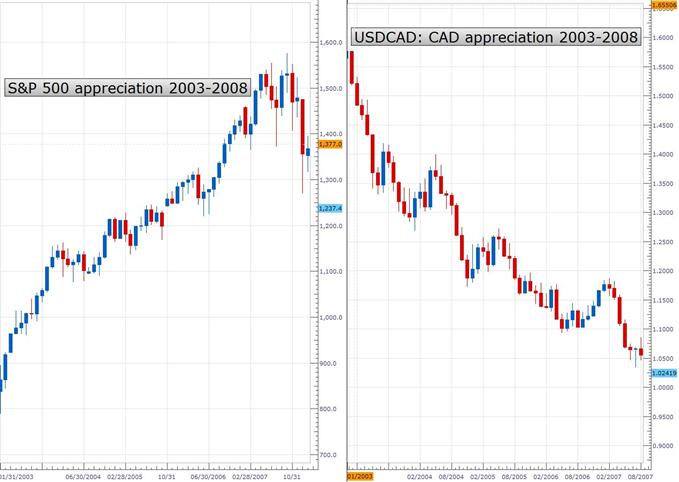 What is Currency overlay?

An astute investor like Joe, with enough foresight to liquidate his investment before the 2008 crash, should’ve known to hedge. Currency hedging (or currency overlay) essentially involves selling one’s native currency to offset any gains it might accrue over the investment period. Had Joe hedged, he would have sold USD/CAD (bought Canadian Dollars against the US Dollar) to the amount of his US investment.

It’s a win-win strategy – by 2008, Joe’s profit from his currency trade would have offset the decrease of investment return value caused by the appreciation of the Canadian Dollar versus the Buck during the same time. However, had USD/CAD climbed during this period, Joe’s losses would have been covered by the Buck appreciation, which would have made his S&P returns worth more in Canadian money.

Overlay strategies originated in Europe in the 1980s and have since spread as a popular way to eliminate currency risk. Today, with the availability of web-based forex platforms, any investor can successfully hedge a foreign investment.

To add a twist, let’s say that in 2003 Joe had a long-term market view. Joe correctly foresaw the Canadian Dollar appreciating versus the Dollar, and wanted not only to hedge out his losses but to turn a profit. This marks the distinction between passive and active currency hedging.

A passive strategy focuses on complete elimination of currency exposure as described above. The hedge is equal to (or a fixed percentage of) the investment and enables the investor to focus solely on his investment without the worry of currency risk. These investors look no further, preferring to take their profits from the investment itself.

An active strategy, however, takes a position on market direction and seeks to profit while keeping risk at a minimum. For example: Joe could have varied the percentage of his currency hedge, based on market fluctuations and his short and medium term view of market movements, with the goal of beating his investment return benchmark.

Hedging can be a complicated business, and many people hire professionals to do their currency hedging for them. This is often unnecessary – any smart trader should be able to execute a successful overlay strategy. Over the coming weeks and months, DailyFX will be running a series of articles on currency overlay, and what you can do to protect your foreign investment. Each piece will cover a different face of the dozens of strategies out there.

Judging by the amount of FX hedge funds springing up all over the world, currencies are becoming increasingly relevant in the investment word. We expect market volatility to only increase as the Euro crisis intensifies. Don’t miss out – hedge your market knowledge, just like your investments.