Trade Update: US Dollar Surge the Real Deal, We Like Buying Strength

Article summary: The impressive US Dollar breakout looks like the real deal. Here’s how we’d like to trade the Greenback against the Yen, Euro, Australian Dollar, and others going forward.

An impressive US Dollar surge against the Japanese Yen and broader forex counterparts has coincided with a substantive jump in volatility prices.

We recently wrote that we favored buying the US Dollar near its lows versus the Euro and British Pound as volatility remained low. Higher volatility expectations in the AUDUSD and NZDUSD likewise made buying the US Dollar attractive as it broke to fresh peaks. So far so good—we were correct in our Dollar trading bias and fortunate to be on the correct side of the change in market regime.

A major shift in forex volatility prices now leaves us in favor of further US Dollar gains as volatility prices surge. The Dow Jones FXCM Dollar Index is now at its greatest distance above its 200-day Simple Moving Average since its 2009 peaks.

The fact that the Greenback has rallied so strongly in such a short period of time warns that it might be overextended and we could see a short-term pullback (USDJPY lower; EURUSD, GBPUSD, and AUDUSD higher). Yet the severity of the move warns that this is likely a continuation of the US Dollar uptrend.

We can’t reasonably advocate loading up on so many USD-long positions given the risk of short-term corrections, but we’ve subsequently changed our trading strategy biases and will look to trade the USD higher going forward. 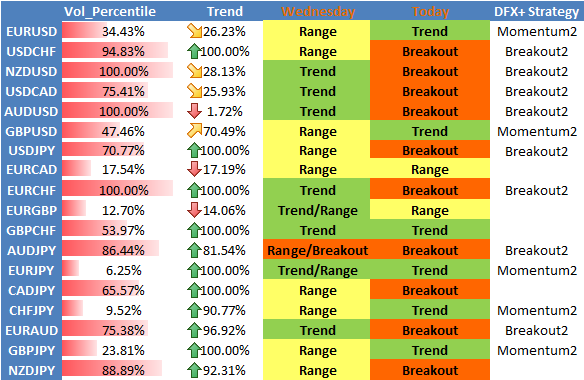 Wrapping things up: The surge in forex volatility prices suggests that the US Dollar breakout versus the Japanese Yen, Euro, British Pound, Swiss Franc, and Australian Dollar is the real deal. We don’t like switching our trading strategy biases on an intra-week basis, but if the facts change—and they have—we’d be remiss to ignore.

We wouldn’t necessarily advocate getting long the USD into Friday’s close, but we suspect the week ahead will bring a continuation of US Dollar strength.

Automate the Range2 trading system via the FXCM Apps store