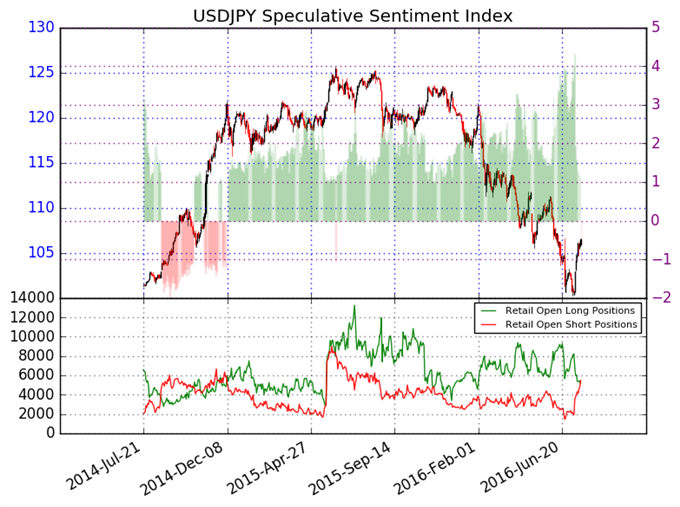 USDJPY– Retail FX traders are now net-short the US Dollar versus the Japanese Yen for the first time since the pair traded near ¥120 through late 2015. The substantive shift warns the pair may be at a significant crossroads, and a close above critical technical resistance at ¥106.80 could help confirm the turn higher.

We most often take a contrarian view to retail FX ‘crowd’ sentiment; if traders are short we prefer to be long and vice versa. Past performance is not indicative of future results, but our data shows the majority of traders have remained net-long the USD/JPY with few interruptions as the pair has fallen sharply from decade-plus highs.

The potential for a similarly significant shift from the Bank of Japan could likewise support calls for a major Japanese Yen turn lower (USD/JPY turn higher). It was the Japanese central bank that famously launched aggressive monetary policy easing which ultimately sparked a multi-year downtrend in the Yen. An argument might be made that the BoJ has less ammunition to spark similar moves going forward, but the threat of aggressive easing cannot be ignored.

It will be critical to watch whether the most recent retail FX sentiment shift marks the start of a much larger USD/JPY rally.