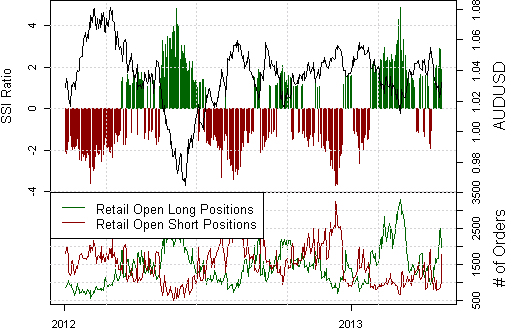 AUDUSD – US Dollar (ticker: USDOLLAR) price action remains choppy across the board, but the fact that retail forex traders remain long AUDUSD despite its recent bounce leaves us in favor of selling.

Trade Implications – AUDUSD: It’s been a frustrating run for our purely sentiment-driven Momentum2 strategy, as two weeks ago it bought AUDUSD from $1.0472 only to get stopped out and go short from $1.0300 through last week. It once again stopped and reversed, and it is now long from $1.0322. I often emphasize “past performance is NOT indicative of future results” for legal reasons and because I often need the same reminder. Momentum2’s performance in trading the AUDUSD seems like a case in point.

Momentum2 had caught a number of key AUDUSD turning points through 2012 and the first three months of the year, and I’ve underlined its outperformance as a key reason to watch the strategy’s trades. It has subsequently posted a string of consecutive losses, and I can’t reasonably get behind its most recent long order. Streaks work in both directions, and our sentiment-based forecasts on the AUD have proven ineffective. As we wrote last week, remain bearish—but only an AUDUSD break below $1.02 would give me confidence in further downside.

Download all of our Sentiment-based trading strategies free via an ongoing promo on FXCMApps.com