Last week it was noted that “further upside is still possible, but it stands to reason that gold prices have already carved out their apex.” Gold prices have since rebounded from last week’s low below 1880 to trade around 1910 at the time this report was written. The aggressive sanctions against Russia by the European Union and the United States have ratcheted tensions higher as Russia presses forward with its invasion of Ukraine. The core thesis remains: it’s World War 3 or bust if gold prices are going to have any chance at a return to their highs set last week. 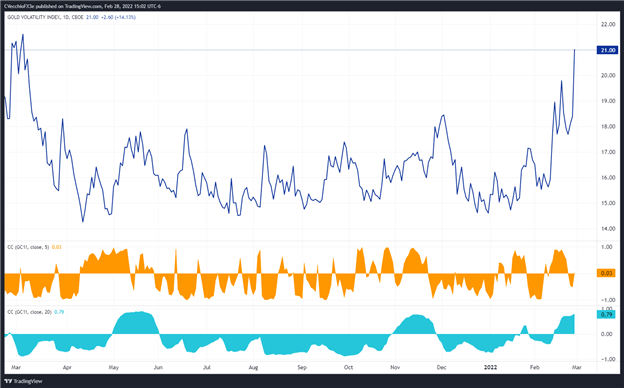 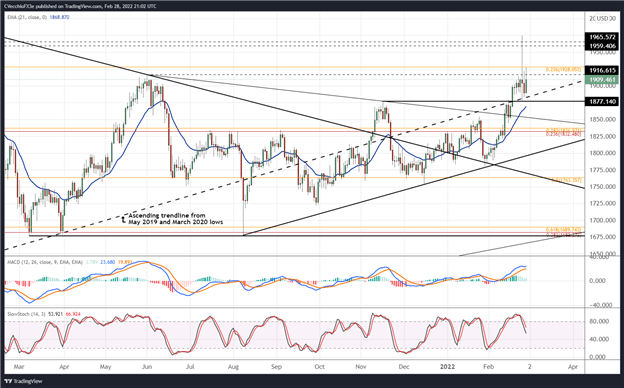 Last week it was noted that “it’s worth noting that the daily candle appears to be shaping up as a shooting star with a long upper wick, suggesting that a new range between 1916.62 and 1974.49 may emerge. A drop below 1916.62 would likely only transpire once Russian troops vacate Ukrainian territory.” This was obviously a miscalculation with the benefit of hindsight, but its worth noting that gold prices failed to overcome 1916.62 on Friday and today, suggesting that markets don’t necessarily believe that the Russian invasion of Ukraine will continue for an extended period of time.

It still remains the case that “another push higher is still possible in the near-term, with gold prices above their daily 5-, 8-, 13-, and 21-EMA envelope, which is in bullish sequential order.” But it’s worth nothing that daily MACD’s move higher while above its signal line is fading, and daily Slow Stochastics have plunged out of overbought territory. Any news of a Russia-Ukraine ceasefire could provoke a sharp pullback. 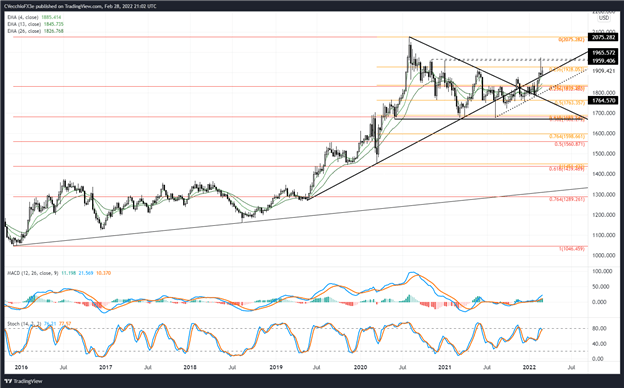 Nothing has changed over the past few days for the longer-term technical outlook. “The longer-term technical outlook has taken on a more bullish tone, suggesting that another push higher towards 1974.49 can’t be ruled out in the near-term. Gold prices are above their weekly 4-, 13-, and 26-EMA envelope, which is in bullish sequential order. Weekly MACD is trending higher while above its signal line, and weekly Slow Stochastics have advanced into overbought territory. Given the long upper wick on the weekly timeframe, it stands to reason that resistance held (despite the overshoot).” Fading any rallies makes sense so long as NATO doesn’t formally enter the Russia-Ukraine conflict. 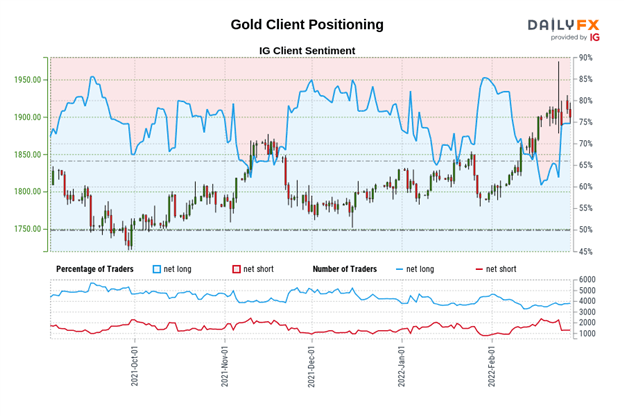