Gold took another dive lower to end last week but saw some strength yesterday around a familiar zone of support. The 1742/65 area dates to April of last year, an area that has in play on numerous times since, with its most recent test in June.

It is hard to say if it will hold, the general tides are not in favor of higher levels for gold. The chart has been broadly neutral to leaning lower since the middle of 2020. The 200-day moving average began turning lower a few months back, indicative of broader weakness.

A closing candle below yesterday’s low at 1742 could do the trick in accelerating another leg lower. If this is the case the next line of support to watch comes by a slope that connects the March 2020 low with the flash-crash on August 9. The line currently runs around 1705.

The next major level of horizontal support comes by way of several lows and highs in a very tight vicinity surrounding 1675. The flash-crash low was very near this level. Since March 2020 it has been in play as support on several occasions, and could make for a very meaningful test should it happen.

As far as the top-side is concerned, as long as support surrounding 1750 (+15/-8) holds, then the outlook is neutral to slightly bullish. It will take a lot of work to turn the picture convincingly bullish at this juncture with the general trend and tone negative. 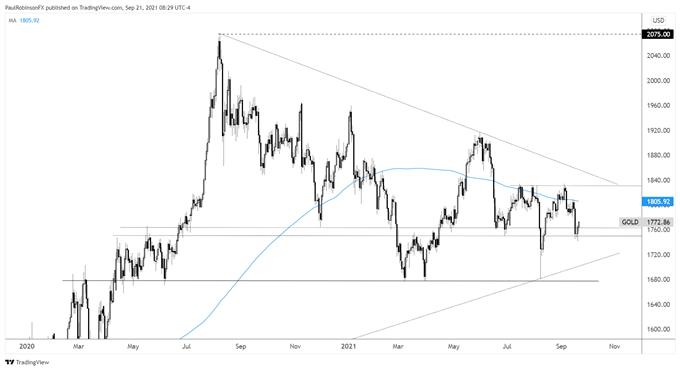 Silver has been firmly entrenched in a downtrend since May – a theme that could continue if support fails here. Going back almost exactly a year there is three instances of 22.39 down to 21.65 putting in meaningful lows.

Right now we aren’t yet seeing much of a reaction off this support level, so it will be interesting to see if this time around a lack of buying interest is indicative of a market that wants to finally take out a sizable level.

In the event we only see a modest multi-day recovery, odds will increase that another leg lower will develop. It will take a forceful driver higher to at least help stabilize silver, but even then the trend is decisively lower.

Tactically speaking, shorts are still in charge and I’ll be on watch for continuation-style set-ups (i.e. horizontal chart patterns.). 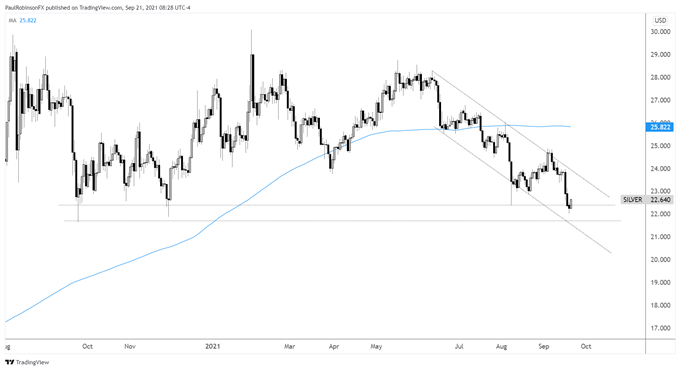