Gold has been holding steady the past few weeks, with it currently trading just above confluent support. The horizontal level from earlier in the year is minor in nature, but the trend-line running up from the March low is a steady line now that it has been tested and held.

The sharp down-move last week was quickly reversed and offers traders a solid low to use as a guide. Hold above 1856 and the outlook is neutral to bullish, however; break below and not only will the low be broken but so will the trend-line and horizontal support level. This could turn the outlook decisively negative.

Ideally, we see gold tread some more water and move towards the rising trend-line before breaking higher. This would create a sturdier base of accumulation near proven support that could give the next move more power. A break above 1916 would have the November/January peaks at 1959/65 in focus as the next targeted level of resistance.

For now, the trading outlook is neutral until we see a little more price action play out. But with a little patience we could have a nice bullish continuation set-up to work with. 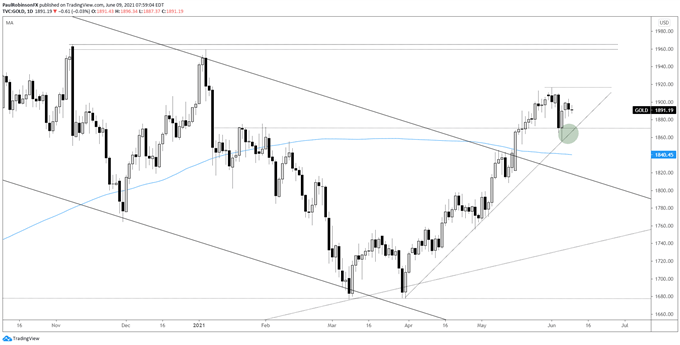 Silver isn’t looking as healthy as gold given that it has sizable resistance in the 28s that recently thwarted a further advance on two occasions recently. Furthermore, not only has resistance been difficult to overcome, but channel support broke last week.

A break outside the channel doesn’t necessarily turn the trend lower, as silver is still tracking sideways, but it does increase the likelihood that weakness could become a theme. If 27.04 breaks, then the March 2020 trend-line will become targeted as a major level of support.

On the flip-side, if silver keeps trading sideways then it could build up the power to finally push on towards the highs from earlier in the year. A firm breakout towards 29 will be needed to really get silver into some open space.

For now, outlook is neutral until we see support or resistance give-way. 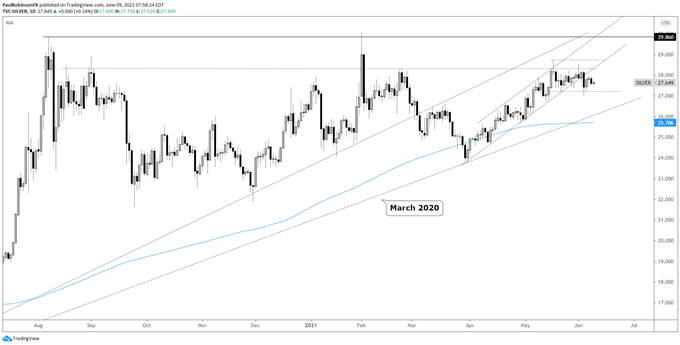