Last week, when we looked at gold it was probing support around the 1760 area and as long as it stayed above 1765 on a closing basis then the bias was neutral to higher. Yesterday’s breakout above 1799 has gold heading higher, with a test of major resistance just ahead.

Coming down from the 2020 high created in August, lies an important channel line. Not only is the line itself viewed as a significant threshold, but it happens to be in confluence with the 200-day moving average at 1851.

A rally to confluent resistance should put gold to the test, one that may have broader implications should it break out. A turn down will also be watched closely as a shallow rejection could demonstrate increased resilience that leads to an eventual breakout.

Should gold turn down in the near-term the prior recent swing high at 1799 will be watched along with the trend-line from March as support. This could offer traders a decent risk/reward trade from the long-side. 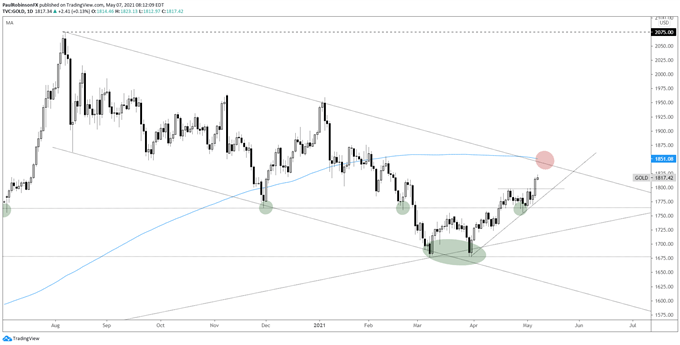 Silver is of course acting similar to gold but with a few different twists. The current rise is developing within an upward sloping channel. The next significant level of resistance is around the 28.30 line, where silver struggled late last summer and more recently in February.

In the short-term, if silver retraces support to watch comes by way of a horizontal level right around 26.63 and the lower channel line off the late March low. As long as the lower threshold of the channel stays intact, so does the upward trading bias. 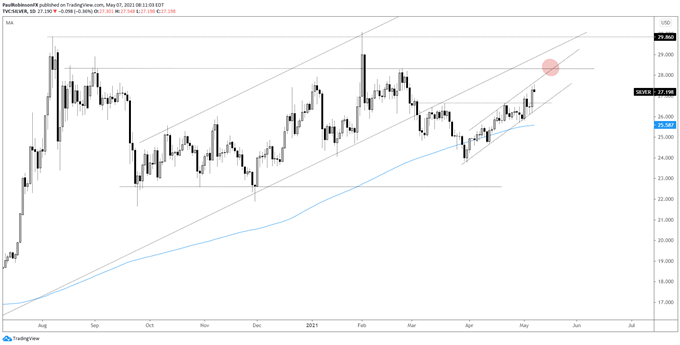