The precious metal space has been under pressure in recent sessions, with gold price declining over 2% in yesterday’s session. The decline has major long-term support back in play around the 1800-mark. It is a level that dates back to the post 2011-peak topping process, when during 2011 and 2012 there were three peaks created before gold fell into a sustained bear market.

While in November the area was breached on a daily basis, it held up when looking at the weekly or monthly chart. Given how long-term this support level is, it is necessary to give some latitude and look at these longer time-frames.

With support under siege again it will be interesting to see if it can hold. It would help shape things up for a long bias if gold could form a higher low around support relative to the November low. But it isn’t necessary that gold hold here for the longer-term to remain bullish.

The general price action since peaking in the summer has been a choppy downward decline lacking any real momentum. It has the makings of a massive bull-flag. In the context of the longer-term upward trend this price behavior is viewed as corrective.

If support does break the corrective price action could still remain in play and the long-term still be intact. However, in the near-term there the trading bias could turn more decisively negative. A drop through 1764 to do the trick in helping along a near-term bearish bias.

As for longer-term cues we will need to remain patient. 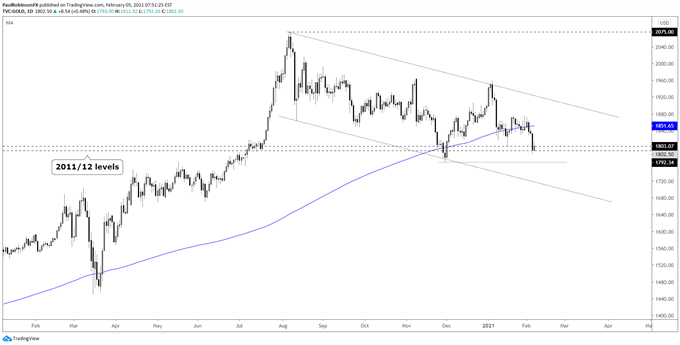 The other day we took a quick look at silver and noted that after the very short-lived Reddit-fueled run, within the context of an uptrend the sturdy trend-line from March may be a good risk/reward spot to look for silver to rise off of. This will be the line-in-the-sand in the near-term to watch.