Gold Price, Silver Charts Bending Back to the Left – In Need of a Breather

Gold recently crossed 2000 for the first time ever, having only one down day since July 16. While the run is looking quite extended, shorting doesn’t hold a lot of appeal given the risks. With that said, a pullback does look to be in the works, and may prove painful for fresh or existing longs, even if only temporarily.

The first spot to watch on a pullback is the psychological hurdle of 2000, followed by the previous record high recorded in 2011 at 1920. There is trend-line support from March, but that may take a good while to be met given how sharp the recent run has been.

As far as resistance? Well, obviously at record highs there isn’t anything visible. The rally is likely to end on the weight of the market becoming overly long and overly bullish in such a short period of time. For now the stance isn’t bearish, but buying at these levels is likely driven by FOMO that could turn into regret later. Better levels for new longs look to be down the road... 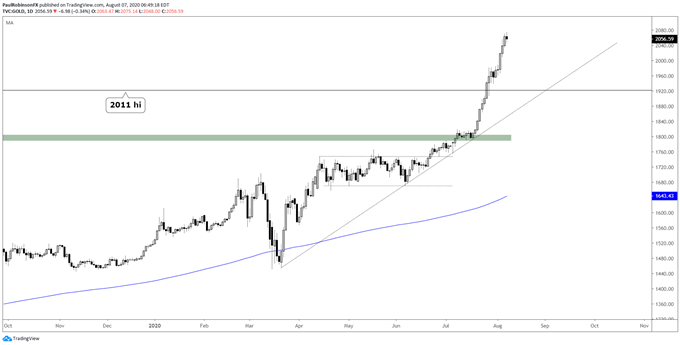 It was just on July 28 that silver put in a cautionary candlestick pattern in the form of a long-legged doji. A candle that is marked by an extremely wide trading range with no real net-change by day’s end. This suggested silver’s run would cool off for a bit, but that only lasted a few days.

The blast on through 26 took out some important resistance levels created during the 2011/12 topping process. This will be the first spot to look for silver to hold as support once the parabolic trajectory turns into a decline. There isn’t any real strong resistance again until around 35, a set of peaks from 2011/12, but it looks unlikley there is enough gas left in the tank to get to that point before seeing a pullback. The stance is of course the same as gold, but with silver being the more volatile of the two precious metals it could experience an extremely wild set of gyrations soon.