Gold prices surged higher for an eighth consecutive week with the XAU/USD breakout marking fresh record highs. Gold is now trading in uncharted territory and while we have no historic price action at these levels, we do have some measured levels in focus just higher. These are the updated targets and invalidation levels that matter on the gold weekly charts heading into tomorrow’s FOMC interest rate decision and the close of July trade. Review my latest Strategy Webinar for an in-depth breakdown of this XAU/USD trade setup and more. 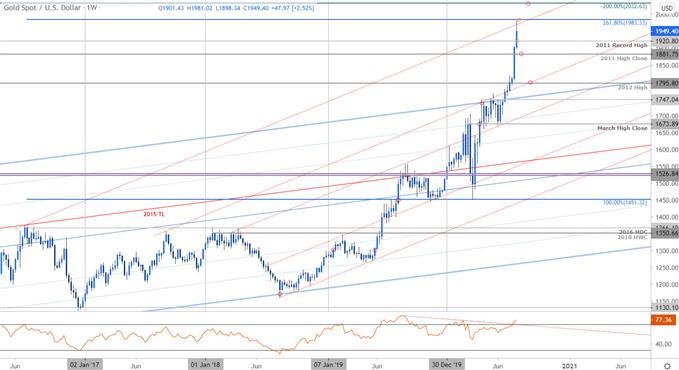 Notes: In my last Gold Weekly PriceOutlook we noted that a six-week rally had taken XAU/USD into multi-year resistance and to be on the lookout for, “downside exhaustion ahead of 1747 IF price is indeed heading higher with a topside breach keeping the focus on objectives towards the record highs.” Three-days later, a breach higher fueled a rally of more than 13% with gold registering fresh record highs early in the week.

Initial weekly resistance stands at the 2.618% Fibonacci extension of the late-2015 advance at 1983 – note that a parallel of the 2018 trendline extending off the 2016 highs also converges on this region and further highlights its’ technical significance. A topside breach / close above this threshold is needed to keep the long-bias viable with such a scenario exposing the 200% measured move of the 2016-2019 consolidation breakout at 2032. Initial weekly support rests at the previous record highs at 1920 backed by the 2011 high-week close at 1881. Broader bullish invalidation now raised to 1795.

Bottom line: The gold breakout is underway with the rally now approaching initial topside resistance objectives. From a trading standpoint, the immediate advance may be vulnerable heading into confluence resistance near 1983 a good region to reduce long-exposure / raise protective stops– keep an eye out for downside exhaustion ahead of 1881 IF price is heading higher on this stretch with a breach exposing 2000 and beyond. Review my latest Gold Price Outlook for a closer look at the near-term XAU/USD technical trading levels. 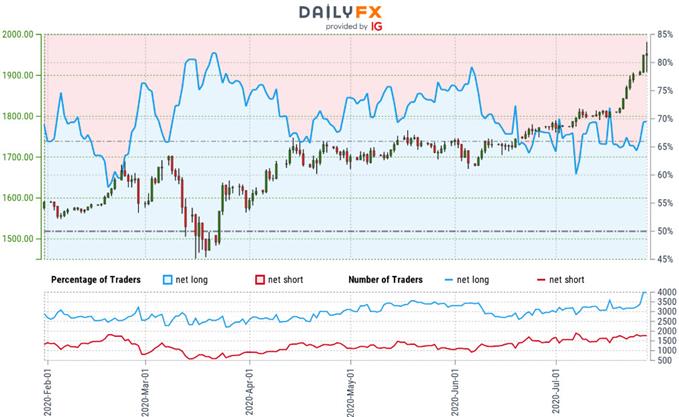