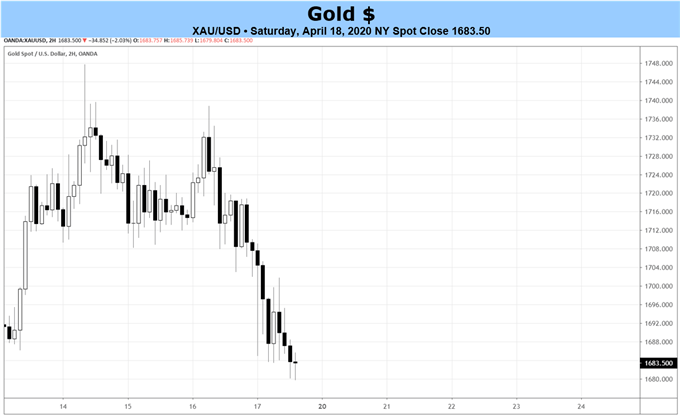 Although gold prices finished lower across every single major currency denomination, gold prices were able to touch fresh yearly highs across several pairs this week prior to the pullback: XAU/CAD, XAU/CHF, XAU/EUR, XAU/NZD, and XAU/USD. And while gold in USD-terms settled lower by -0.82%, it did reach its highest level since the week of November 30, 2012, by elevating to 1747.36 over the course of the week. For the other pairs that hit fresh yearly highs – gold in CAD-terms, CHF-terms, EUR-terms, and NZD-terms – the gains prior to the bearish reversals also represented fresh all-time highs for bullion.

The bearish reversal in gold prices, then, must be viewed through the technical lens (even if this is a fundamental outlook). Hitting several key areas of major technical resistance (in the form of Fibonacci retracements and extensions over various timeframes), gold prices (particularly in USD-terms) have proved rightly susceptible to near-term weakness. Is this a cause for concern, or is this just profit taking?

A former DailyFX analyst had a quip that comes to mind: “Gold is a hedge against sovereign incompetence. People buy gold when they don’t trust politicians who control the levers behind paper money.” With that said, the turnaround in gold prices by the end of the week, despite several pairs reaching fresh yearly and all-time highs, may not be something to be too concerned about in the near-term.

After all, the fundamental bedrock of gold’s recent swing higher – incompetency at the highest levels of government in the developed world when it comes to dealing with the coronavirus pandemic – remains in place across North America and Europe.

The air of uncertainty around the global economy’s ability to recover after the coronavirus has pushed G10 currencies’ central banks into the most extreme “race to the bottom” we’ve ever witnessed – central banks from all around the world are cutting rates towards zero and beyond in order to prevent credit markets from freezing up.

The simple truth of the matter is that as long as the coronavirus pandemic is still spreading, and until there is a sustainable recovery in place central banks are neither likely to raise rates nor will they cease extraordinary easing efforts.

This set of facts undergirds gold’s fundamentally sound foundation in the event of profit taking due to major technical targets having been achieved in the near-term.

The middle of the month presents more opportunity for markets to digest late-Q1’20 and March economic data that has only begun to detail the destruction, both in human and economic terms, wrought by the coronavirus pandemic.

To this end, bad news is good news for gold prices, even if the news seems ‘not as bad as we expected’ – which seemed to be the case with last week’s initial jobless claims report (5.2 million actual versus 5.5 million expected) – because markets are completely burying the lede: in the past four weeks, the US economy has lost as many jobs as the entire economy gained since The Great Recession; The Great Lockdown is an economic crisis unforeseen anytime in human history.

And while the smattering of inflation releases from across the globe would normally pose a great deal of interest, the context of the current market environment dictates that these stale data figures – capturing economic events prior to the onset of The Great Lockdown – will be largely ignored by traders (just like other data that pre-dates coronavirus). The more recent, the more near-term the data, the more likely it is to move markets, regardless of its historical efficacy in doing so.

As such, we’ll be keeping an eye on three economic data releases in particular for gold prices. On Tuesday, April 21, traders should keep an eye on gold in EUR-terms (XAU/EUR) for the April German and Eurozone ZEW surveys, which are set to plunge to all-time lows. On Friday, April 24, the European Commission will release its economic forecasts (which will prove horrible), another catalyst for gold in EUR-terms (XAU/EUR).

Later in the day on Friday, gold in USD-terms (XAU/USD) will be in focus with the preliminary March US durable goods orders report set to be released. The report is set to show the largest contraction in durable goods ever. Durable goods are items with lifespans of three years or longer (automobiles, dishwashers, washing machines, etc.), or purchases that require significant financial outlays and/or credit to acquire; accordingly, such an erosion speaks to the financial decimation that US consumers have experienced, which will likely have a negative impact on US GDP for years to come. 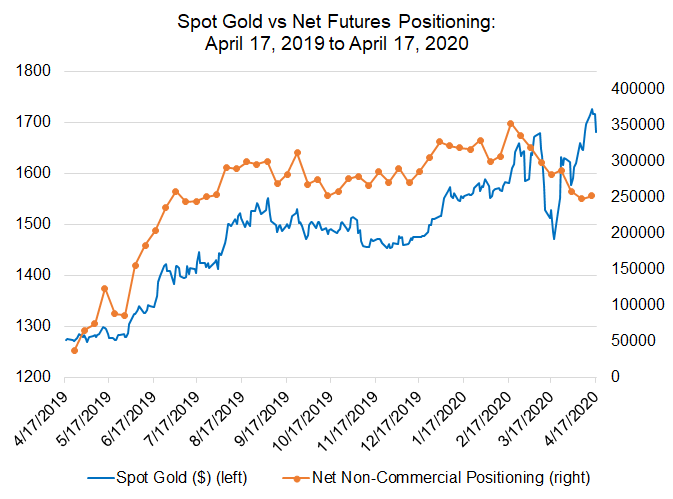 Looking at positioning, according to the CFTC’s COT data for the week ended April 14 speculators increased their net-long gold futures positions to 252.5K contracts, up from the 248.9K net-long contracts held in the week prior. Yet despite gold prices hitting yearly, and in some cases, all-time highs, the futures market is not fully saturated: the all-time high for net-long contracts came during the week of February 18, when 353.6K were held. Or put another way, gold prices have been able to reach new highs despite the fact that there has been a -29% contraction in net-longs – a positive omen for the future. 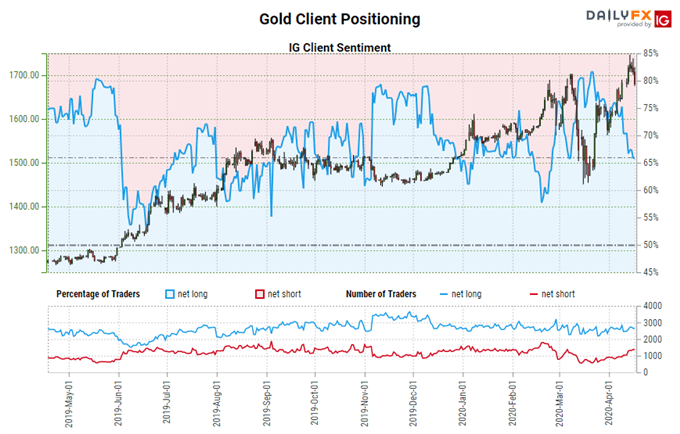 Yet traders are less net-long than yesterday and compared with last week. Recent changes in sentiment warn that the current Gold price trend may soon reverse higher despite the fact traders remain net-long.