Gold prices have stagnated after a strong start to the new year. A lack of escalation in tensions between the US and Iran tamped down the shift to safe haven assets by market participants, undercutting investor demand for precious metals. Amid a resurgent US Dollar (via the DXY Index) through the first three weeks of January, gold prices have started to lose their luster. Now, technical studies suggest that more near-term weakness may be lurking as a near-term top may be in place at the 61.8% retracement of the 2011 high/2015 low range.

Precious metals like gold have a relationship with volatility unlike other asset classes. While other asset classes like bonds and stocks don’t like increased volatility – signaling greater uncertainty around cash flows, dividends, coupon payments, etc. – precious metals tend to benefit during periods of higher volatility. Heightened uncertainty in financial markets due to increasing macroeconomic tensions increases the safe haven appeal of gold. On the other hand, decreased volatility tends to harm gold prices. 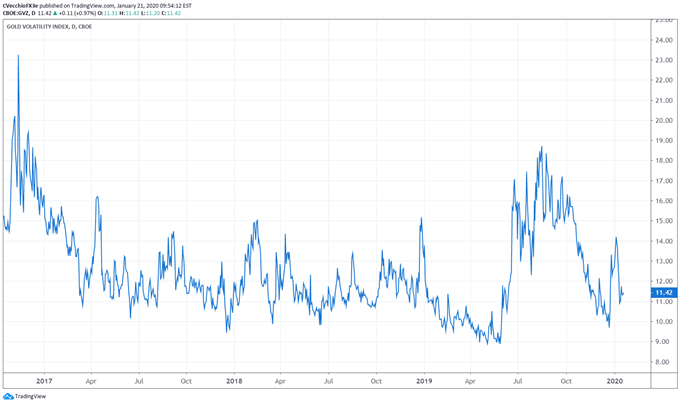 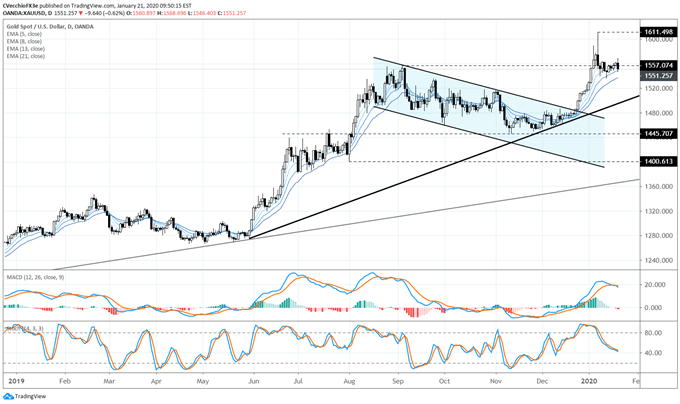 In our last gold price forecast, it was noted that “while gold prices are continuing a longer-term bottoming effort, they have not officially transitioned from ‘bearish correction’ to ‘bullish reversal’; as a result, we must treat recent efforts by gold prices as a sign that a near-term top against the 61.8% retracement may be in place.”

In technical analysis, Fibonacci retracements are based around the concept of the Golden Ratio, 1.618, or phi; the 61.8% retracement is the inverse of phi and is deemed the ‘make or break’ level to determine if price action is ready to embark on a new trend.

In this case, the 61.8% retracement encompasses the entirety of the 2011 high to 2015 low range at 1598.97; gold prices have not been able to climb back through said level after briefly clearing it during the first week of January.

At present time, gold prices remain intertwined around their daily 5-, 8-, 13-, and 21-EMA envelope, which is in neither bearish nor bullish sequential order. A bearish engulfing bar appears to be forming on the daily candle (at the time this report was written), further evidence that recent gold price action is indicative of a near-term top. Daily MACD has issued a sell signal (albeit in bullish territory), while Slow Stochastics have fallen below the median line into bearish territory.

More corrective price action may be ahead for gold prices in the near-term. 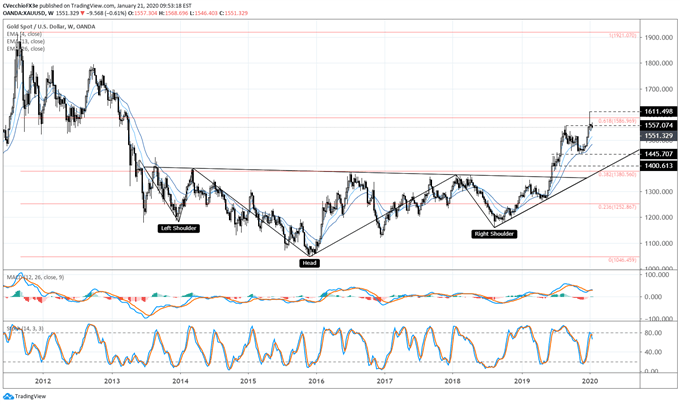 Gold prices have not made much progress after spiking to a seven-year high during the first week of January. It thus still holds that the rally and rejection at the 61.8% retracement (1586.97) must be viewed in context of the longer-term technical picture: the gold price inverse head and shoulders pattern that originated earlier this year is still valid and guiding gold price action.

Only a break below the August 1, 2019 bullish outside engulfing bar low at 1400.38 would draw into question the longer-term bullish potential for gold prices. If the 61.8% retracement at 1586.71 is indeed cleared out, then the odds of a move up to the head and shoulders targets would increase materially. 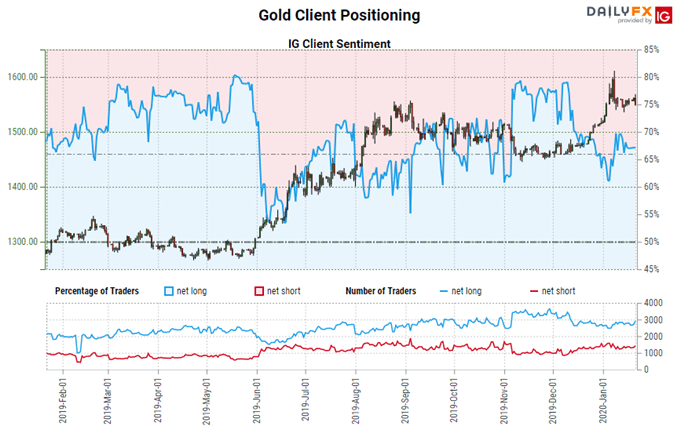 We typically take a contrarian view to crowd sentiment, and the fact traders are net-long suggests gold prices may continue to fall.

Traders are further net-long than yesterday and last week, and the combination of current sentiment and recent changes gives us a stronger gold-bearish contrarian trading bias.