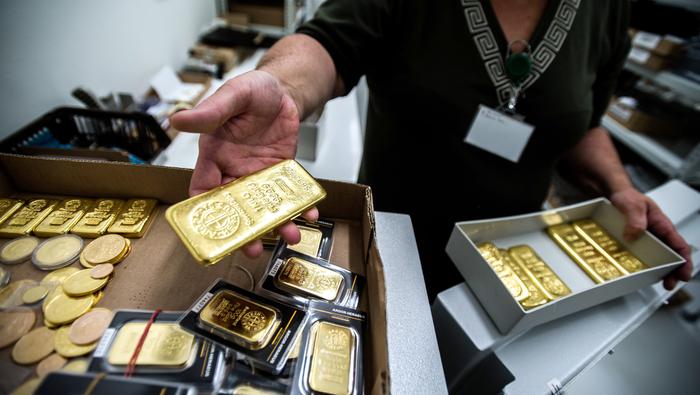 Gold prices started the year with a bang as sharply escalating geopolitical tensions between the US and Iran sparked a rush to safe haven assets. Yet after a meager Iranian response (akin to throwing firecrackers on your neighbor’s lawn), US President Trump’s offer to de-escalate tensions has been viewed as a welcomed off-ramp by market participants.

Gold prices, which were up by nearly 4% this week at their peak, have now pulled back by around -0.2% since the close on Friday, January 3. Such a dramatic expression of volatility at a relative high in price action (gold prices hit a seven-year high on January 8) often coincides with a top (or bottom) in markets; hence the expression, “turns in the market are the most violent moves.”

Heightened uncertainty in financial markets due to increasing macroeconomic tensions (like the major escalation in geopolitical tensions between the US and Iran) increases the safe haven appeal of gold. On the other hand, decreased volatility tends to harm gold prices. 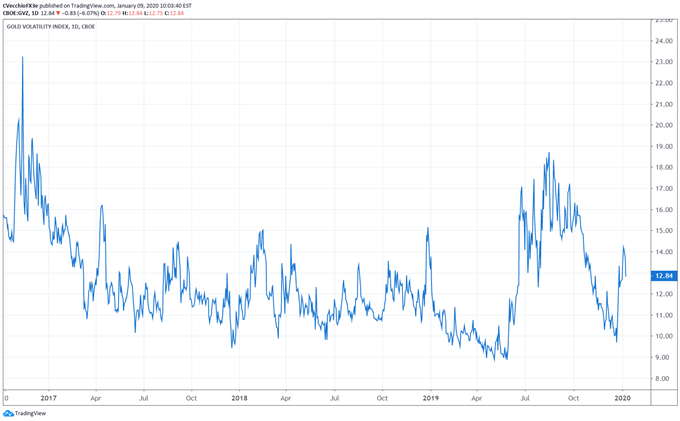 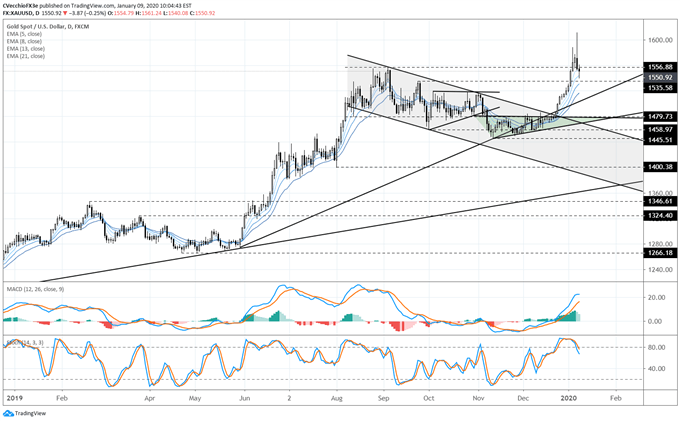 In our last gold price forecast, it was noted that “gold prices have achieved the 61.8% retracement of the 2011 high/2015 low range at 1586.71, indeed clearing the level briefly earlier on Monday, January 6. This is further confirmation that a long-term bullish bottoming effort is still in process.” The 61.8% retracement is an important threshold in the near-term for gold prices.

In technical analysis, Fibonacci retracements are based around the concept of the Golden Ratio, 1.618, or phi; the 61.8% retracement is the inverse of phi and is deemed the ‘make or break’ level to determine if price action is ready to embark on a new trend.

As such, while gold prices are continuing a longer-term bottoming effort, they have not officially transitioned from ‘bearish correction’ to ‘bullish reversal’; as a result, we must treat recent efforts by gold prices as a sign that a near-term top against the 61.8% retracement may be in place.

For now, gold prices are intermingled with the daily 5-, 8-, 13-, and 21-EMA envelope, below the former two but above the latter two. Daily MACD is trending higher, although its gains appear to be slowing down, while Slow Stochastics have dropped out of overbought territory. Momentum is starting to shift in a significant fashion. 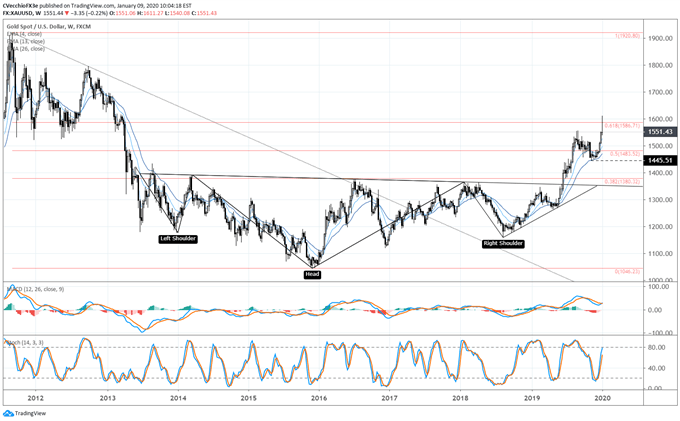 The perspective the weekly timeframe provides is necessary given the crossroads at which gold prices find themselves currently situated. The rally and rejection at the 61.8% retracement (1586.71) must be viewed in context of the longer-term technical picture: the gold price inverse head and shoulders pattern that originated earlier this year is still valid and guiding gold price action.

Only a break below the August 1, 2019 bullish outside engulfing bar low at 1400.38 would draw into question the longer-term bullish potential for gold prices. If the 61.8% retracement at 1586.71 is indeed cleared out, then the odds of a move up to the head and shoulders targets would increase materially. 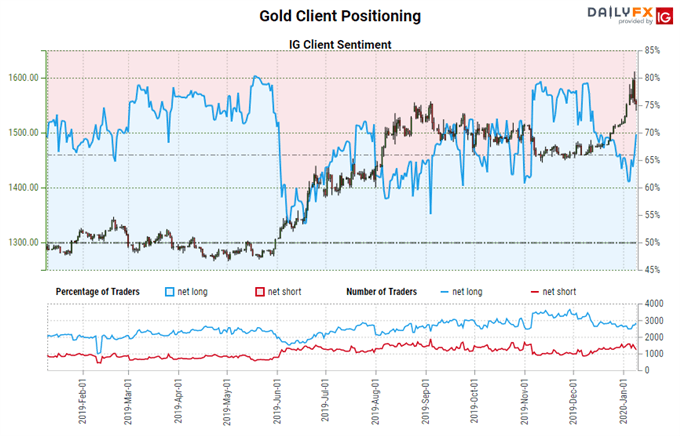 We typically take a contrarian view to crowd sentiment, and the fact traders are net-long suggests gold prices may continue to fall.

Yet traders are less net-long than yesterday and compared with last week. Recent changes in sentiment warn that the current gold price trend may soon reverse higher despite the fact traders remain net-long.