Gold price gets run into support test around 1450

Last week was gold’s worst weekly performance in three years, dropping well over 3% into Friday’s close. The decline has key support in the 1459/53-area in focus, consisting of a swing-low from October and a swing-high from July.

Support may keep a floor in gold, but if it doesn’t then attention will turn to the parallel tied to the trend-line running down from the September high. It may or may not hold, it’s not a proven line of support just yet. A hold keeps the bull-flag scenario on the table, while fold brings into play the potential for more selling.

If support at current levels holds or just below at the lower parallel, more time will be needed before the bull-flag can be built and even push through the 2011/12 levels can unfold. For now, the strategy remains the same – stand aside until the picture provides better clarity or fade support and resistance levels with in mind of taking quick profits on short-term reversals. 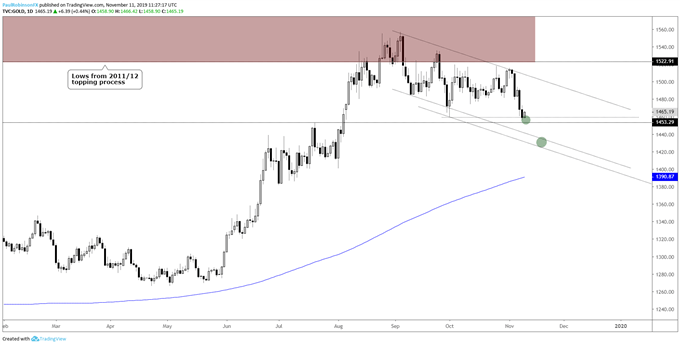 Silver has been hit especially hard of the two major precious metals, retracing more than half of the rally since the May low. The recent leg lower has so far been on par with the force produced during the last two down-moves since the early September peak.

Having made a lower-low beneath the October low, silver is vulnerable to further selling in the absence of solid support nearby. Support to watch arrives via the 200-day MA and twin peaks from January/February, making just above the 16-line an important area to keep an eye on should price continue to weaken in the days ahead.