Signs that the US and China are moving towards an agreement to end the trade war have reduced demand for safe haven assets, such as gold and the Japanese Yen. But with Brexit talks ongoing, and concerns persisting about global growth – even if G10 currencies’ central banks’ rate cut odds have fallen – traders aren’t ready to throw in the towel on all their macro hedges. In turn, despite the flow of positive news, gold prices have been able to break out of the downtrend from the September. Like silver prices yesterday, this may mean the start of the breakout from the bull flag.

While other asset classes don’t like increased volatility (signaling greater uncertainty around cash flows, dividends, coupon payments, etc.), precious metals tend to benefit during periods of higher volatility. Heightened uncertainty in financial markets due to increasing macroeconomic tensions (like US-China trade war or the prospect of a no-deal, hard Brexit, for example) increases the safe haven appeal of gold and silver. On the other hand, when uncertainty decreases, volatility tends to fall, reducing the demand for safety assets. 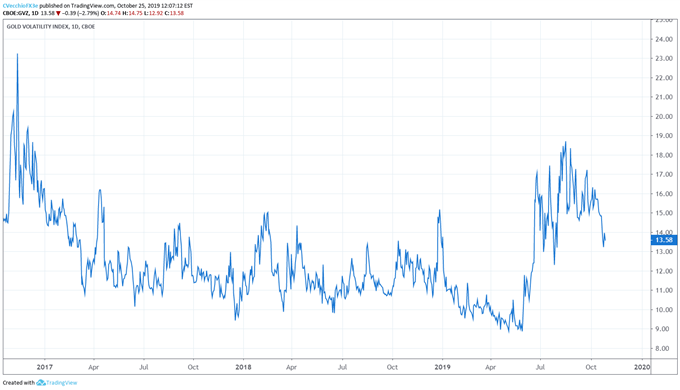 Gold volatility (as measured by the Cboe’s gold volatility ETF, GVZ, which tracks the 1-month implied volatility of gold as derived from the GLD option chain) has broken to its lowest level since the end of July, currently trading at 13.58. However, as was noted earlier this week, “despite the plunge in gold volatility, gold prices have not followed.”

Much like for silver prices, that gold prices continue to maintain their elevation despite a plunge in gold volatility bodes well for the future. 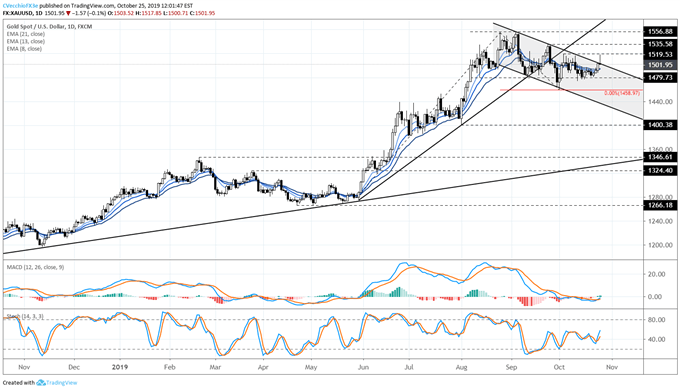 Given that trading is a function of both price and time, it was only a matter of time before the sideways consolidation in gold eventually resulted in price breaching the downtrend from the September swing highs. Yet the breakout attempt today is lacking enthusiasm, with a hammer forming on the daily candle. While the time to rally may be near, it is also possible that a false bullish breakout is afoot.

It thus still holds that “if the bull flag in gold prices is legitimate, a break above the late-September swing high at 1538.58 would need to be achieved. In doing so, gold prices would also retake the uptrend from the May and August 2019 lows. The 100% extension of the move from the May low, the September high, and the October low calls for a target price of 1726.31.” 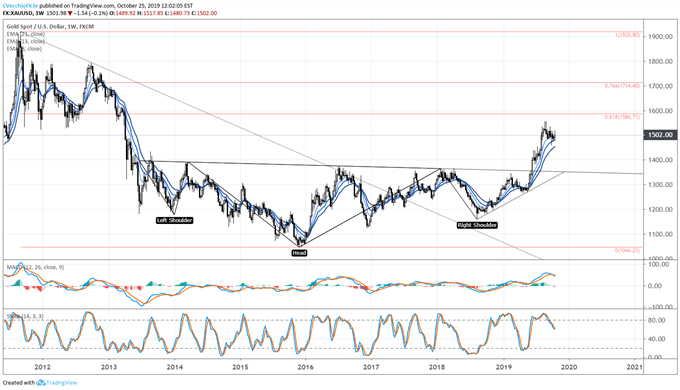 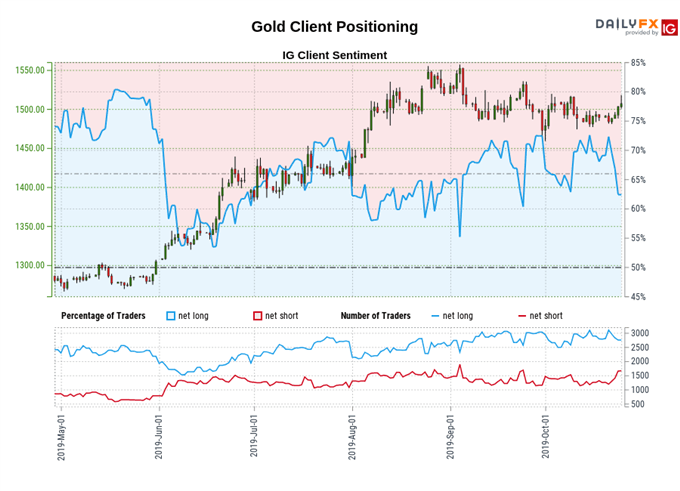